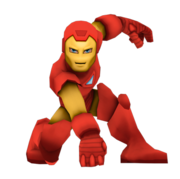 A genius inventor with a crazy gadget for every situation, Iron Man flies in super-powered armor that he designed himself and is also the leader of the Super Hero Squad. He is very proud of his inventions.

Tony Stark has no powers of his own, but they are derived from his Iron Man Armor.

Seemingly those of the Anthony Stark of Earth-616.

Like this? Let us know!
Retrieved from "https://marvel.fandom.com/wiki/Anthony_Stark_(Earth-91119)?oldid=5819236"
Community content is available under CC-BY-SA unless otherwise noted.