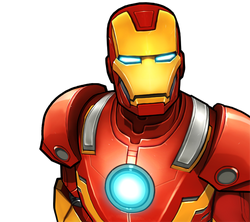 When Nick Fury created Avengers Academy, Tony Stark was the first student to be recruited, upon arriving at the Academy the first thing he did was begin construction of the Academy's very own Stark Tower so he could keep his way of living and his gadgets while staying at the Academy.

After construction of the Tower, a Hydra bully showed up at the Academy and tells Tony that Hydra is going to attack it soon, but he wanted to be the first to beat up the rich kid that has been saying he will take down Hydra. Black Widow then appears out of nowhere and scares the bully off, Tony tries to chat and flirt with her, but she ignores him and tells him to get new recruits to the Academy to beat the incoming Hydra attack and that they would talk about real threats to the Academy afterwards.

Tony is then approached by Administrator Pepper Potts and tasked with the recruitment of the Academy's next student, Wasp. Upon meeting him, Wasp tells him she was going to contact him when she saw the Stark Tower being built at the Academy, but she had wrecked her phone so was unable to. Tony then tells her that the Academy is looking for new superheroes to join and that he can get her a new phone if she joins the Academy and helps them fight Hydra, she accepts his proposal and joins the academy.

After getting Wasp to join the Academy, she proposes that they should build a Blasting Range to train their abilities. Tony says he is having trouble with his aim and he blew up his lab the last time he used his repulsor, so Janet helps him train at the blasting range. After Tony Stark finishes his training he asks Janet how many recruits does she think they need to defeat the Hydra henchmen force that were planning to attack the Academy and take over New York City. Janet tells him they only need one recruit. Tony is surprised by her answer and wonders who that person is. Administrator Pepper Potts is then contacted by Janet about that person, Administrator Pepper Potts agrees with her and asks her and Tony to recruit the new student, Loki an immortal Asgardian sorcerer.

Loki was initially angry at Janet for spreading embarrassing pictures of him on the internet and ruining his reputation. He tells them if they want to recruit him, Janet better apologize to him and they have to somehow fix his reputation. Tony uses his hacking skills to remove all the photos from the internet, while Loki and Wasp work out their issues. He then joins the Academy and helps them beat the Hydra forces.

After numerous weeks of battling Hydra split into two teams, Captain America and Iron Man finally ended their rivalry when Iron Man was able to bring Captain America's friend Bucky back to his senses, he had been brainwashed by Hydra and Iron Man was able to built a machine to counter the mind control, they both realized that their rivalry made no sense, and working together was the better solution, united again they defeated Hydra and imprisoned their leader the Red Skull. [1]

During Malekith's invasion of Earth, by Odin's demand Tony worked as a blacksmith to create weapons to help defeat the Dark Elves using a special Iron Ore that was particularly effective against them.[1]

Iron Man was one of the Avengers Academy students that helped defeat and recapture the villains that were freed from their cages by Baron Zemo after he was manipulated by Mephisto into believing they would serve him if he freed them.[1]

Sometime in the future, Iron Man would engage in a battle that would cost him his helmet. His damaged helmet would be thrown into the TimeFog and found in the past.[1]

Tony Stark has no powers of his own but they are derived from his Iron Man Armors.

Like this? Let us know!
Retrieved from "https://marvel.fandom.com/wiki/Anthony_Stark_(Earth-TRN562)?oldid=6082709"
Community content is available under CC-BY-SA unless otherwise noted.