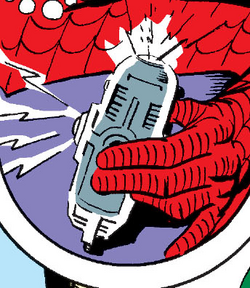 The Anti-Magnetic Inverter was a device built by Peter Parker/Spider-Man to counteract the magnetic power that the Vulture uses for flight. [1]

However, after the Vulture escapes prison, the device is ineffective on him as his new wing design have the ability to counter it. [2]

It was later used during his fight with Clash to erase his recording list and stop his attack. [3]

After deducing that the Extremist was manipulating electromagnetic forces to use his powers, Spider-Man brought the inverter along to his second confrontation with him. It took some time for the device to adjust to his powers but once it did it nullified them all, allowing Spidey to defeat him. [4]

Over a decade later, during an interview for a position at Horizon Labs Peter would bring up the device as a way to disrupt a magnetic harness. [5]

Like this? Let us know!
Retrieved from "https://marvel.fandom.com/wiki/Anti-Magnetic_Inverter_(Spider-Man)?oldid=6429793"
Community content is available under CC-BY-SA unless otherwise noted.