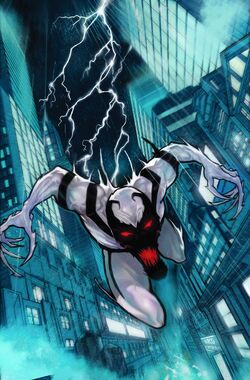 When Eddie Brock separated from the Venom symbiote, traces of it were left in his body. Later, suffering from cancer, Brock started working as a volunteer in the F.E.A.S.T. Center. Martin Li, the founder of F.E.A.S.T. and alter-ego of the supervillain Mr. Negative, used his powers to cure Eddie's cancer.

In the process, Li accidentally infused the remnants of the symbiote in Eddie's bloodstream with his power and fused them to his white blood cells, creating a new hybrid symbiote which manifested when the Venom symbiote attempted to leave its then-current host, Mac Gargan, and return to Eddie.[1]

This new symbiote - dubbed "Anti-Venom" by Eddie, demonstrated tremendous healing powers and other powers that differ from the Venom symbiote, such as producing antibodies that can cure any known disease and remove any other impurities within a human body. Unlike other symbiotes, this symbiote is completely mindless and Eddie Brock is in full control of his actions. This symbiote was destroyed when it was used as a cure for the Spider-Virus.[2]

The Symbiote can mimic any type of clothing whatsoever, as well as blending Anti-Venom in his surroundings, rendering him invisible. The Symbiote has augmented all of its host's physical abilities to superhuman levels equal to, and in some cases greater than, Spider-Man's.

The symbiote produces antibodies that can "cure" a person afflicted by radioactivity, parasites, diseases, and drugs.

Brock as Anti-Venom is capable of lifting 70 tons in his regular size, but this is not his true limit as his strength increases with his size and variable muscle mass.

Like other symbiotes, the Anti-Venom symbiote is capable of shapeshifting to project pseudopods that can restrain or attack opponents, as well as forming bladed weaponry out of its constituent matter.

Like this? Let us know!
Retrieved from "https://marvel.fandom.com/wiki/Anti-Venom_(Klyntar)_(Earth-616)?oldid=6148115"
Community content is available under CC-BY-SA unless otherwise noted.