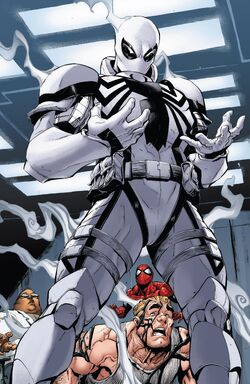 Suspecting that the Venom symbiote would develop an immunity to the medication he had developed for its toxic shock syndrome, Alchemax astrobiologist Dr. Steve began creating a new cure derived from the Anti-Venom symbiote.

Desiring to reclaim the symbiote and become Agent Venom again, Flash Thompson confronted its host, Eddie Brock, at Alchemax's astrobiology lab. Conflicted over having to choose one of its two favorite hosts over the other, Venom attempted to bond to both of them at the same time. Spider-Man intervened intending to kill the symbiote and "save" both Flash and Eddie from it, overturning one of the vats of Anti-Venom serum. Flash was doused in it, and the symbiote biomass bonded to him was altered into an artificial replica of the original Anti-Venom symbiote.[1]

The symbiote has since joined Flash in the Klyntar's Hive-Mind, where his consciousness was stored as a codex after his death. Together, they joined Rex Strickland's army of former symbiote hosts to battle the dark elder symbiote god Knull.[3] At the God-Hive, Flash was able to gain control of a symbiote-dragon in the real world and reconstitute the Anti-Venom symbiote;[4] later using it to resuscitate his physical body.[5]

Seemingly those of the original Anti-Venom symbiote.

Seemingly those of the original Anti-Venom symbiote.

Like this? Let us know!
Retrieved from "https://marvel.fandom.com/wiki/Anti-Venom_II_(Klyntar)_(Earth-616)?oldid=6467975"
Community content is available under CC-BY-SA unless otherwise noted.