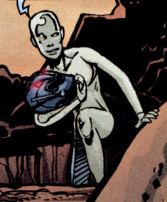 Antigone was a Synthezoid created by Alkhema at Robotopia, Al-Luxor, Egypt. She was created in a batch of Bio-Synthezoids.[1]

It was later revealed that they were actually part of Ultron's plans to create an army which was hidden in Alkhema's programming. The Avengers destroyed the based believing all the Synthezoids had been killed. She survived carrying Ultron's head hiding until the Avengers had left. Ultron ordered her to rebuild him but due her childlike nature she kicked his head like a ball claiming she wanted to see the world.[1]

Like this? Let us know!
Retrieved from "https://marvel.fandom.com/wiki/Antigone_(Earth-616)?oldid=5678193"
Community content is available under CC-BY-SA unless otherwise noted.