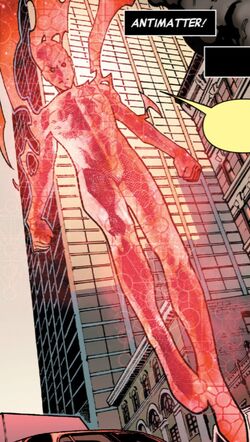 When Singularity appeared within Earth-616, Antimatter was also created. He first emerged in Earth Orbit near Alpha Flight's Low-Orbit Space Station,[1] and after briefly orienting himself, he almost immediately began attacking Singularity.[2]

He followed her from New York City to Japan to Florida,[3] before finally facing off in the Blue Area of the Moon,[4] where Antimatter battled against A-Force. Antimatter was seemingly destroyed, but his particles dispersed across the Earth, infecting multiple individuals.[5] His apparent death also brought forth other interdimensional travelers such as Dazzler Thor and the Countess.[6]

Antimatter is a sentient being composed of counterpart particles and light, posing an exact opposite to Singularity:

Like this? Let us know!
Retrieved from "https://marvel.fandom.com/wiki/Antimatter_(Earth-616)?oldid=5434959"
Community content is available under CC-BY-SA unless otherwise noted.