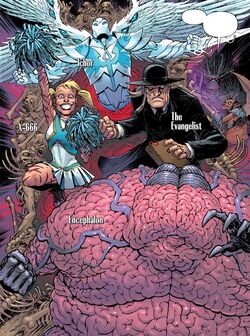 The Antitheses were the four hellish warriors Blackheart created using the H'elian's Mirror Cauldron to oppose the four heroes who were trying to stop him from bringing Hell to Earth in Las Vegas. Each one of them was the polar opposite of one of the heroes: The Evangelist was Agent Venom's, Enchephalon was Red Hulk's, X-666 was X-23's, and Ichor was Ghost Rider's.[1]

After easily defeating Ichor,[2] Ghost Rider attacked Gari Oyle before she could find and destroy the magical amulet Johnny Blaze put on the city limits to prevent Hell's corruption from spreading any further, prompting Blackheart to send the remaining Antitheses after her. Agent Venom and Red Hulk, having recovered from their encounters with their antitheses, arrived soon afterwards and killed X-666. The Evangelist then killed the Red Hulk while Encephalon dealt a death blow to the Ghost Rider, who used what little time she still had alive to escape from there. Alone, Agent Venom took on the two remaining Antitheses and managed to kill them.[3]

Retrieved from "https://marvel.fandom.com/wiki/Antitheses_(Earth-616)?oldid=5544319"
Community content is available under CC-BY-SA unless otherwise noted.