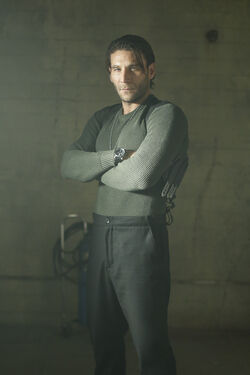 Anton Ivanov lost respect for his father, an oil drill worker, when he saw him sucking up to the richest man in town. His father worked hard for what little he had, while the other man inherited his wealth and never worked a day in his life. Ivanov firmly believed that everything one had in life should be earned through old-fashioned hard work, not given unfairly.[1]

As a young man, Ivanov joined the SVR. His unit was sent to recover a device from a mine in the Russian coutryside. His unit was met by S.H.I.E.L.D. agent Phil Coulson, who claimed to be a representative from the United Nations. While Coulson spoke with the commander of Ivanov's unit, someone else drove off with the device they were sent to recover. Realizing they had been tricked, the commander took Coulson into their custody. As the unit drove away with their prisoner, Coulson's ally ambushed them and rescued him. The three other members of Ivanov's unit were tortured and executed to cover up their failure.[1]

Over the next several years, Ivanov became an incredibly wealthy industrialist, using his vast fortune to collect various military antiques, including a Cold War-era submarine. However, his thirst to avenge his comrades never went away. Ivanov combed through newspapers and rumors for any sign of the man he blamed for their deaths. Eventually, he found that Coulson was not only connected to several incidents of "alien" activity, but also came to believe he was responsible for them, too.[2]

Ivanov naturally connected the rise of Inhumans to his nemesis Coulson. He became involved with the Watchdogs, a radical anti-Inhuman hate group tied to several attacks against Inhumans. Operating out of his personal submarine, Ivanov quickly rose through the Watchdogs' ranks, coming to be known by his subordinates as "The Superior."

The Superior eventually came into contact with Ellen Nadeer, an American senator with her own strong anti-Inhuman sentiments. With Senator Nadeer's help, Ivanov's Watchdogs were able to conduct multiple simultaneous attacks against Inhumans in several major cities across the globe. Although S.H.I.E.L.D. eventually foiled their plans, the Watchdogs were able to kill 17 Inhumans by the end of the day.[3]

As part of their deal, Ivanov sent his lieutenant, Shockley, to discreetly kill the Senator Nadeer's brother. Vijay Nadeer had recently emerged from a Terrigenesis cocoon, and the senator wanted her brother dead rather than reveal she was related to an Inhuman (or possibly one herself). Vijay was able to plead with his sister to save his life, but the Superior ordered Shockley kill him anyway. Senator Nadeer killed her brother herself when they fled from their family estate with Shockley when S.H.I.E.L.D. agents came to rescue him.[4]

For their next mission, the Superior contacted a Russian cell of former Hydra operatives to assassinate Jeffrey Mace, the Inhuman Director of S.H.I.E.L.D., and steal the briefcase he always kept near him. Although the Superior's men failed both objectives, Ivanov had inadvertently forced Mace to reveal to S.H.I.E.L.D. that he was not actually an Inhuman, and his enhanced abilities were the result of a formula he regularly took.[5]

Through Senator Nadeer, the Superior came to meet Dr. Holden Radcliffe and his assistant Aida. Radcliffe wanted the Watchdogs' help in recovering the Darkhold, a dark and powerful book in S.H.I.E.L.D.'s possession. In return, Radcliffe offered to use the Darkhold to create a way to end the "Inhuman plague" for the Superior. Ivanov also believed Radcliffe could help him lure out Phil Coulson, unaware that the two men knew each other.[2]

Ivanov read from the Darkhold to find a way to annihilate Inhumans on his own against Radcliffe's wishes, but the book only told him Radcliffe was the answer. Radcliffe had a collection of Terrigen Crystals from his time with a previous benefactor. The Superior took one of these crystals and gave it to Shockley so he could go to Senator Nadeer's office and force her to undergo Terrigenesis. Once she had turned, the Superior planned to use Nadeer as bait to lure S.H.I.E.L.D. and Agent Coulson into a direct conflict. However, Shockley - not Nadeer - underwent Terrigenesis. As a result of his change, Shockley was given violent explosive abilities that destroyed the Senator's office.[6]

The Superior demanded Shockley reveal he had failed in his mission to capture Senator Nadeer when he returned to the Superior's hideout in Washington. Shockley explained that he somehow survived the explosion caused by the Senator's transformation. Realizing S.H.I.E.L.D. was likely on Shockley's tail, the Superior left him behind to deal with them while he made his escape. S.H.I.E.L.D. eventually discovered Shockley's Inhuman abilities and dropped him out of their plane somewhere over the southwestern United States. Shockley called the Superior from a hotel's phone, and confessed to his Inhuman abilities. Despite this, Shockley reaffirmed his allegiance to the Superior and the war against Inhumans, and promised to deliver S.H.I.E.L.D. to him. Shockley's trap worked, but the Superior and his Watchdogs capture Director Mace instead.[6]

The Superior held Director Mace prisoner at an abandoned SVR facility in Krasnoyarsk Krai where he kept his submarine. He repeatedly tortured the director, and especially reveled in the true nature of Mace's supposed-Inhuman abilities. Meanwhile, Radcliffe increasingly spent his time in the Framework, a simulated reality he and Aida created with the Darkhold, leaving Aida to handle most of his responsibilities. However, the Superior was disgusted by Aida because she was not a true human, and he made no effort to hide his disgust from her.[1]

Ivanov also left a number of clues for Coulson to follow so he could find the captured Jeffrey Mace and Melinda May. One of these led Coulson back to the Russian mine where he encountered Ivanov all those years ago. The Superior had personally unearthed the corpses of the three other men in his unit and left them in the mine's main office. He placed a phone in the mouth of one of these corpses so he could talk to Coulson when he found the bodies. One of the Superior's comments led S.H.I.E.L.D. to find the facility in Krasnoyarsk Krai. As luck would have it, Coulson came face-to-face with the Superior when his agents spread out to find their teammates. The Superior taunted Coulson with what he did to him all those years ago. Coulson, however, claimed to have very little memory of the event. To him, the Superior's "cool origin story" was just one of the hundreds of missions he went on during his time with S.H.I.E.L.D., and Ivanov was just one of the countless, nameless thugs who tried to stop him from saving the world. Their showdown was interrupted by the Inhuman S.H.I.E.L.D. agent Daisy Johnson. Coulson left Johnson to fight the Superior while so he could find Mace. Although the Superior fought her with everything he had, he was no match for her Inhuman abilities. She used her powers to destroy a support pillar near where the Superior was standing, leaving him buried under a pile of rubble.[1]

While the Superior was unconscious, Aida managed to replace four high-ranking S.H.I.E.L.D. agents, including Coulson, with their Life-Model Decoy counterparts. Once these LMDs and the remaining agents returned to their base, Aida recovered the Superior's unconscious body and escaped to an oil rig in the Baltic Sea on his submarine. The Superior, strapped to an operating table, begged Aida to not let him become a thing like her, but Aida still had a plan for him. She cut off the Superior's head and placed it in a pod to keep it alive. From the pod, the Superior would be able to remotely control a large number of LMD bodies created in his likeness so he could defend the Framework while Aida used the Darkhold to try and find a way to let her feel human emotions.[1][7][8]

While he watched over Aida's prisoners, Ivanov discovered his new bodies were programmed to be unable to harm them. He vowed to kill Coulson and the rest once Aida was free from Radcliffe's programming and was thus able to free Ivanov of his. When Director Mace died while he was in the Framework, Aida had Ivanov crush his bones with a hammer before disposing of his body to make it look like he had been killed by Daisy Johnson's Inhuman powers.[9][10] She also had Ivanov and his remaining henchmen build a machine on the oil rig which she could use to construct a human body for herself. She used the machine to give herself a new body, but around the same time, Coulson, May and Fitz escaped from the Framework. Aida - who also used the machine to give herself Inhuman abilities - teleported away from the submarine with Fitz, leaving Coulson, May, and the still-unconscious Mack behind for Ivanov to deal with.[9] Ivanov distracted Coulson and May with a few of his LMD bodies escaped to his submarine and torpedoed the oil rig. Coulson, May and Mack were all rescued before they went down with the rig.[8]

Aida made contact with Ivanov again once Fitz rejected her advances. Aida, distraught and incapable of dealing with her newfound emotions, violently took advantage of one of Ivanov's LMD bodies to vent her frustrations. She then had one of Ivanov's LMD bodies attend a meeting of international intelligence agencies to discuss the future of S.H.I.E.L.D. after Director Mace's body was discovered. Ivanov attempted to convince the agencies to turn against S.H.I.E.L.D. before they could unleash an army of Inhumans against them. He also had an LMD of Daisy Johnson attempt to assassinate General Talbot during the meeting. Although S.H.I.E.L.D. were publicly brandished as traitors, S.H.I.E.L.D. arrived on the scene in time to prevent Ivanov from escaping. The real Daisy Johnson teamed up with the Ghost Rider to destroy Ivanov's LMD.[10]

Like this? Let us know!
Retrieved from "https://marvel.fandom.com/wiki/Anton_Ivanov_(Earth-199999)?oldid=6073803"
Community content is available under CC-BY-SA unless otherwise noted.