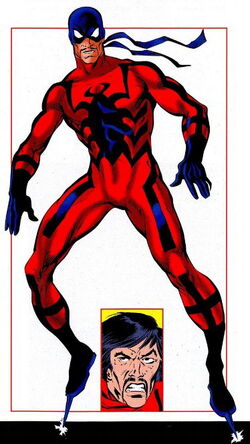 Anton Miguel Rodriquez was a revolutionary in the South American country of Delvadia fighting to overthrow the fascist government. He and his fellow freedom fighters employed such tactics as bombings, kidnapping politicians for ransom, and assassinations. Rodriquez was expelled from his group after he murdered a security guard in cold blood during a bank robbery.

The Delvadian government took notice of Rodriquez and gave him a new mission and role as the Tarantula, a government backed costumed agent, in effect a fascistic Captain America. He was used against his former allies in assignments he especially enjoyed. Rodriquez's violent streak eventually got the better of him when he killed a guard who wouldn't allow him to beat a captured revolutionary. Disavowed by the government, Tarantula fled South America and began living in New York illegally. He soon began to integrate himself into the city's criminal underworld.

For his first big score, Tarantula, along with his two henchmen Hildago and Juan, hijacked a Hudson River dayliner in order to rob the passengers and hold them for ransom. Spider-Man, with help from the Punisher, managed to foil the Tarantula's plan and capture him.[4]

Alliance with the Jackal

The Tarantula became a mercenary, later allying himself with the Jackal,[5] Senor Muerte,[6] and attempted to abduct or murder "Nose" Norton.[3] He was also hired by Edward Lansky to stage his own kidnapping, as well as killing Mayor Beame.[2] He was unsuccessful in all of these ventures.

The Brand Corporation mutated the Tarantula into a Spider-like creature with eight legs and an arachnid face with mandibles. Enraged, Tarantula sought his revenge against the Corporation. Spider-Man and the Will O' The Wisp prevented him from murdering a Brand executive. Seeing that he had mutated even further into a giant spider, Tarantula dove from a building into a hail of gunfire from NYPD officers. Tarantula died quickly on the street below.[7]

Several years after Anton's death, Tarantula was among the many of Spider-Man's deceased foes who were brought back to life by Spider-Man's clone Ben Reilly, who was acting as the new Jackal, as an incentive to convince Spider-Man to join his enterprise.[8] When the Jackal's ally Doctor Octopus turned against him and set off the decay of the bodies of his subjects, Tarantula's body started breaking down.[9] While many of the people the Jackal cloned back to life didn't survive the decay before Spider-Man put a halt to it, others managed to survive.[10]

In human form the Tarantula was a brilliant athlete with great agility, especially in leaping. He was a superb hand-to-hand combatant.

In human form the Tarantula possessed the normal human strength of a male of his age, height, and build who engaged with intensive regular exercise. As a giant spider the Tarantula had superhuman strength and could lift (press) 10 tons (were his limbs capable of lifting objects).

Like this? Let us know!
Retrieved from "https://marvel.fandom.com/wiki/Anton_Miguel_Rodriquez_(Earth-616)?oldid=6030590"
Community content is available under CC-BY-SA unless otherwise noted.