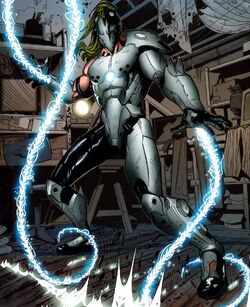 Anton Igorevich Vanko (Russian: Антон Игоревич Ванко) was a young scientist from a small Russian village by the name of Volstok. One day, the village was attacked by someone wearing a stolen battlesuit of Iron Man Armor who murdered a number of the townspeople, including Vanko's father in an attempt to frame Tony Stark for the crime.[2]

Using a specialized rifle, Vanko was able to shoot the impostor just before he fled, causing the chest plate on the armor to come off.[2] Vanko became obsessed with exacting vengeance on Stark, still believing him to be the man who attacked his village, and decided to use the chest plate to fashion a suitable weapon to do so. Over the next six months, he reverse engineered a suit of body armor equipped with energy whips, and vowed to kill Stark in order to avenge his father.[3]

After breaking into the prison where Stark was being held for his alleged crimes, Vanko killed several guards and attempted to track down and murder Stark and his confidant Pepper Potts. Stark fought off Vanko using a crude suit of Iron Man armor fashioned from parts of various machines around the prison, and forced him to flee.

After Stark tracked down the criminal syndicate who framed him, Vanko arrived at their headquarters, intent on finishing off Iron Man once and for all. It was there that Vanko learned that Stark was indeed framed and that the syndicate was hired to destroy Volstok by Russian Prime Minister Vladimir Putin, in order to wipe out an activist who was creating anti-Putin sentiments. Despite learning of Iron Man's innocence, Vanko made one final attempt to kill him, claiming that even though he did not destroy the village, his technology did. After the building caught fire, both men were ultimately forced to run to safety, and Vanko made his escape. Stark was later cleared of his alleged crimes, and helped rebuild Volstok. Vanko had no part in it, and instead went to Moscow, approaching Putin's residence in the Red Square and preparing to properly exact vengeance next time around.[4]

Later on, he joined Shadow Council's Masters of Evil along many other supervillains,[5] in Max Fury's attempt to unleash the Abyss from a tri-crown and conquer the world.[6]

Whiplash was one of the many villains of Iron Man gathered by Spymaster in his plan to assault the Stark Tower after the Avengers left Earth to battle the Builders.[7] Once in the Stark Tower, Spymaster used teleporter discs to teleport some Iron Man Armors to his buyers, but he escaped and left Firebrand and the rest of his accomplices to be discovered by the heroes which were using the tower as a base. They managed to defeat the heroes, and they were offered to be taken to Spymaster by Titanium Man. When they arrived to a spaceship where Spymaster was, they were ambushed by him and Titanium Man, who revealed himself as Captain Atlas of the Kree, the buyer.[8]

They managed to escape custody and started fighting Spymaster, Titanium Man and the army of Iron Men, controlled by the former. The actual Iron Man arrived to the spaceship, after having tracked down the armors, and helped Whiplash and his allies defeat the enemies. Blizzard later froze himself along with Iron Man in order to give his allies time to escape.[9]

Whiplash was next seen attending a meeting of criminals arranged by the Hood in order to exact revenge on those responsible for creating Pleasant Hill, a S.H.I.E.L.D. prison facility that altered inmates memories and appearances to make them think they were living in a picture-perfect rural American town.[10]

Following the second superhero civil war during which Tony Stark fell into a coma, Whiplash attacked the ruins of the fallen Stark Tower. Enraged that he couldn't confront Iron Man himself, Whiplash attempted to access whatever usable technology remained in the rubble. He was stopped by The Thing, who had met up with Stark's assistant Mary Jane Watson few moments earlier.[11]

Some time later, Whiplash attacked the Capitol Building, having targeted Congressman Zelman, whom Vanko accused of selfishly neglecting his duties. Unfortunately for Vanko, he executed his attack in the middle of a hearing X-Men members Kitty Pryde and Colossus were attending, and was defeated by their combined efforts.[12]

Vanko is a skilled athlete and has great knowledge of technology, as he was able to make his armor from a destroyed piece of Stark Technology.

Vanko possesses the strength of a man of his height and build who engages in intensive regular exercise.

A hard enough impact will cause his armor to lock up.

Whiplash Armor: A suit of armor crafted from the Iron Man Mark 29 armor and equipped with two electrically charged whips in the wrists. The whips are strong enough to slice through a metal staircase and can deflect bullets or be spun like propellers for limited flight. A pair of infrared contact lenses that give him night vision and the ability to perceive thermographic images through solid objects.

Two whips constructed from the copper wires of the electromagnetic motor that powers the Mark 29 armor's weaponry. The whips are spring loaded and can extend up to 25 feet in length. The whips can be used for a variety of offensive and defensive maneuvers, Whiplash primarily uses them for slicing through solid objects, but he can also reverse their polarity and use them as grappling weapons or spin them to use for defensive purposes such as deflecting bullets or for limited flight.

Like this? Let us know!
Retrieved from "https://marvel.fandom.com/wiki/Anton_Vanko_(Whiplash)_(Earth-616)?oldid=6445021"
Community content is available under CC-BY-SA unless otherwise noted.