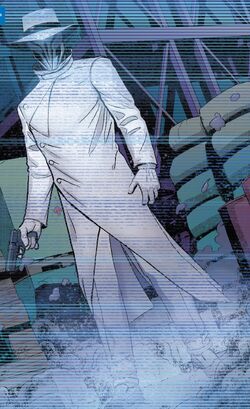 Antony Diaz was a former U.S. Army Special Forces operator, and close friend of Angel Larimore while serving together with the NYPD. Larimore discovered that the mayor, Wilson Fisk, was hiring the Watchdogs and that they were masquerading as cops. He told Diaz and his brother, Tony, about this, but was beaten and killed before he could expose Fisk's corruption.

In order to get revenge, Antony joined the Scourge of the Underworld program and started killing all the corrupt cops in New York City. His massacre of criminals caught the attention of Captain America, who confronted Angel's brother and discovered the truth behind the cop killings; however, they were ambushed by the Watchdogs and Antony arrived to assist Steve in the fight against them, as he had been tracking Captain America. After this, riots broke out across the city and people started to think that they were like Scourge, so they decided they had to stop him before the city got destroyed. Captain America tracked Diaz back to his residence upstate and attempted to arrest him there; however, before Steve was able to capture Scourge, he used a machine gun and committed suicide.[4]

Expert Marksman: Diaz was a graduate of the U.S. Army's sniper school with a massive kill count during two tours in Afghanistan.[1]

Like this? Let us know!
Retrieved from "https://marvel.fandom.com/wiki/Antony_Diaz_(Earth-616)?oldid=5409310"
Community content is available under CC-BY-SA unless otherwise noted.