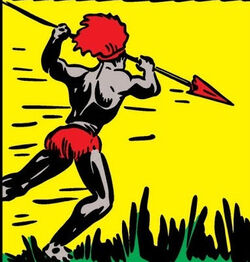 Aorangi was the leader of a tribe of African natives who led Paul de Kraft and Ed Kivlin into the Belgian Congo against his will. At first Aorangi and his people feared reprisals from the "white jungle god" (in reality David Rand who was known as Ka-Zar among the animals). However, Ka-Zar would eventually be captured by Paul de Kraft, and bound and tortured. Ka-Zar would manage to break free, and be forced to battle Aorangi to the death, slaying the tribal leader and sending his followers fleeing into the jungle[1].

Like this? Let us know!
Retrieved from "https://marvel.fandom.com/wiki/Aorangi_(Earth-616)?oldid=4424458"
Community content is available under CC-BY-SA unless otherwise noted.