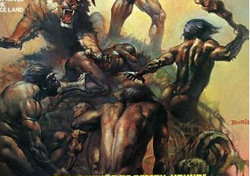 The Ape-Men as they were known are early hominids from Human evolution.

For information on the early and the pre-humans, please consult the following pages:

Paul Harper traveled back in time and was chased by Ape Men. He theorized that avalanches could have trapped a few Ape Men in suspended animation for millions of years. When finally thawed, they could account for [at least some of] the Abominable Snowman sightings in the present day.[1]

They were taken to the Savage Land by the Nuwali. They have thrived while in the rest of the world they became extinct. They have attacked Ka-Zar and Zabu but only when they came into their territory.[1][2]

Like this? Let us know!
Retrieved from "https://marvel.fandom.com/wiki/Ape-Men?oldid=6427225"
Community content is available under CC-BY-SA unless otherwise noted.