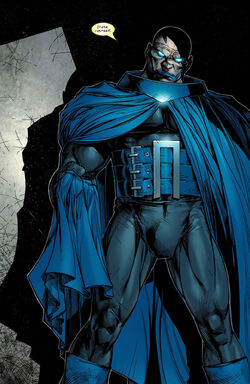 The exact nature of Apocalypse's origins are unclear. He would later claim to have "lived across eons", and that he had slept. According to Cable, he believed himself to be the first Mutant, though given the nature of Mutantkind origins on his reality, this is highly dubious.

What is known is that at a point in the early twenty-first century, Mr. Sinister, a scientist working for Oscorp suffered a schizophrenic break after experimentation with a super-soldier serum he made, eventually coming to believe he was working at Apocalypse's behest, speaking to him through a stuffed effigy in his apartment. Certainly, Apocalypse was not the product of Essex's delusions. Cable would eventually speculate that Essex either woke or released him, though how this happened is unclear.

At Apocalypse's commands, Essex tracked down and killed several Mutants, coming to the attention of the X-Men. Essex believed in doing so he would make Apocalypse manifest, but in his attempt to kill his last targets, the junior members of the X-Men, Essex failed, and was imprisoned in the Triskelion, where Apocalypse appeared to Essex and commanded him to choke himself.

Some time later, having evidently not succeeded, Essex was found in his cell muttering that "A child is coming. The master will be reborn", referring to Apocalypse.

At some point after, Essex was found dead, suffocated by his own shirt crammed into his throat (presumed a suicide). However, he soon returned to life to herald the coming of Apocalypse, and finalize his task, Apocalypse having decided he was still useful. He completes his mission of killing ten mutants, five of which are from the Morlocks, the other being Angel, despite the efforts of the X-Men.

A mortally wounded Sinister then rose into the air, and then up to the surface of New York, where he physically transformed into Apocalypse. The X-Men followed, quickly attacking him. However, Apocalypse quickly proved more dangerous than they realized, proving able to take the abilities of other Mutants, disabling them permanently, as he proved by grievously injuring Wolverine, tearing the man's arm off. The battle was soon joined by the appearance of the Morlocks, though Apocalypse also took their powers as well, using his powers to make them and the X-Men fight one another against their wills, along with any other Mutant in the city.

A contingent of S.H.I.E.L.D. agents then attacked Apocalypse, causing his body to alter into a cyborg-like form. Apocalypse's only comment on this was that their attacks simply made him stronger. At that point, Charles Xavier and Cable arrived from an alternate future via time-travel, with the former using his powers to block Apocalypse's control over them. Meanwhile, Apocalypse engaged the S.H.I.E.L.D. agents, followed by the Fantastic Four, though Apocalypse proved immune to their attacks.

Xavier attacked Apocalypse directly, using his telepathic powers on him, but Apocalypse somehow resisted. The two fought, Charles once again managing to get inside his head, but Apocalypse was able to turn the advantage on him, and prepared to kill Xavier. At that point, Jean Grey unleashed the Phoenix Force. The Phoenix then attacked Apocalypse, releasing Xavier. Undaunted, Apocalypse faced his new opponent, declaring his intention to take her power as well. The two fought, the Phoenix proving far stronger than Apocalypse had reckoned, badly damaging him. Realizing that she was holding back, Apocalypse tried pressing his assault. In response, the Phoenix unleashed the full array of her powers, destroying Apocalypse, leaving Essex behind. Phoenix proclaimed that Essex was his "true form revealed", though she did not elaborate on that part.

Upon the reveal of his transformation, Apocalypse was shown to possess a myriad of abilities and has displayed the following:

Though invulnerable to multiple types of attacks, even Apocalypse cannot fight against the Phoenix Force, for it is a force of the universe.

Like this? Let us know!
Retrieved from "https://marvel.fandom.com/wiki/Apocalypse_(Earth-1610)?oldid=5758376"
Community content is available under CC-BY-SA unless otherwise noted.