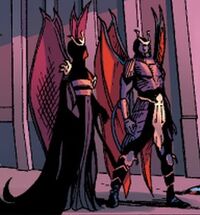 We've sentenced the Earth to death. The Scarlet Witch once said, "No more mutants"-- I say no more humans.

The life of these Apocalypse Twins followed a similar path to their Earth-616 counterpart up until they abducted the Scarlet Witch and Wonder Man.

The Twins successful made the Scarlet Witch cast a spell to teleport all of mutantkind to their Ark, so mutants could survive while Exitar annihilated the Earth, after the Twins had incriminated humanity for the use of Jarnbjorn to kill a Celestial.[1]

As they were witnessing the descent of Exitar on Earth, Captain America tried to stop them, but he failed and was captured.[2]

Thor crashed into the Ark to retrieve Jarnbjorn, in hopes he could reason with Exitar or use the mystical axe to kill him if he needed to do so. He freed Captain America, and together, they fought the Twins separately. Uriel was killed by Thor, and Eimin was sent off the ship by Cap.

When a portion of the Ark exploded, Thor saw Jarnbjorn floating in space with debris and tried to reach it, but Eimin stood in his way.[3] Even though Thor retrieved the axe from Eimin, and tried to reason with Exitar, she later distracted him long enough for the Celestial Executioner to finally destroy the Earth.[4]

Eimin would later rule Planet X, until Kang and the Chronos Corps helped the remaining members of the Avengers Unity Division travel to the past and overwrite the timeline by preventing the destruction of Earth. Eimin was trapped in temporal stasis by Kang for betraying him.[5]

Transportation: Flight under their own power, formerly the Akkaba Ark
Weapons: Formerly Jarnbjorn

Retrieved from "https://marvel.fandom.com/wiki/Apocalypse_Twins_(Earth-13133)?oldid=5554535"
Community content is available under CC-BY-SA unless otherwise noted.