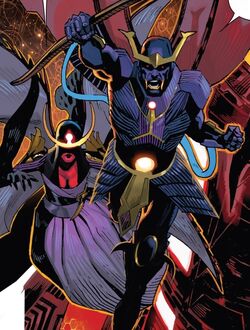 During the Dark Angel Saga, the Horseman of Pestilence Ichisumi became pregnant with Archangel's heirs.[2] Some time after his defeat at the hands of X-Force, Ichisumi gave birth to the twins Uriel and Eimin. Soon afterwards Kang the Conqueror kidnapped them and disappeared into the time stream.[3]

The Twins reappeared in the modern era, when Genocide, son of Apocalypse, contacted a Celestial Gardener. He hoped to receive the Death Seed and replace Apocalypse as Archangel had. As the Gardener judged his worth, Uriel and Eimin appeared. Using the axe Jarnbjorn, Uriel killed the Celestial. Together, he and Eimin defeated Genocide's forces. They then attacked the Peak. [1] They next travelled with Thor and Sunfire to Akkaba City to murder the remainder of Clan Akkaba and destroy the city.[4]

Using the Jarnbjorn, the Twins killed a Celestial[5] and incriminated the Earth for said crime. Thus, Exitar the Executioner would arrive to the planet in order to destroy it.[6] The Apocalypse Twins convinced the Scarlet Witch to cast a spell in order to bring every mutant to their ark, in order to ensure the survival of mutantkind while humankind died along with Earth.[7]

In a divergent universe, their plan would have succeeded. But from said universe, the remaining of the Avengers Unity Division arrived and thwarted the Twin's plans.[8] Exitar was killed, and Kang fed from his energies to become a powerful being.[9] As Havok was fighting Kang, Sunfire used part of the absorbed energy of the Celestial to destroy the Apocalypse Twins and their ark.

Daken and Grim Reaper, the two remaining Horsemen of Death under the service of the Twins, managed to get back to Earth along with the Twin's corpses.[10]

Like this? Let us know!
Retrieved from "https://marvel.fandom.com/wiki/Apocalypse_Twins_(Earth-616)?oldid=5553465"
Community content is available under CC-BY-SA unless otherwise noted.