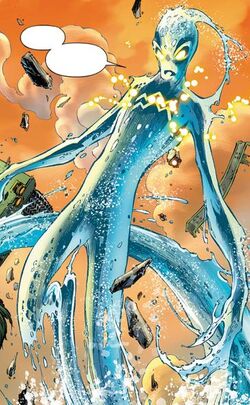 Aquarius was one of the members of the new Zodiac team, a group of ambitious people who wanted to conquer the World using special suits, which gives super-powers, supplied by Thanos, who wanted them to steal different powerful items and take them out from Earth in order to bring balance to the planet and the cosmos.

He was one of the Zodiac members who attacked the Helicarrier in order to retrieve an Ultimate Nullifier[1] and he was left powerless when Iron Man used a sonic disruptor to shut down their special costumes and leave them powerless, Thanos appeared with the objetive to kill the Avengers for interfering in his plan.[3] When Maria Hill activated the Helicarrier's self-destruct in an attempt to kill Thanos, the Zodiac's master left them to die in the explosion.[4]

Transformation - Water: Aquarius possesses the ability to bodily transform himself, in whole or in part, into a watery liquid substance of unknown composition. While in this state, his consciousness can control every droplet that comprises his body. Thus he can will himself to turn liquid whenever struck. (Presumably if he were to will just his torso liquid, his still solid head and arms would fall to the ground. It is not known if this would cause injury to his solid parts or not. Aquarius can also propel the liquid particles of his body at great pressure in the same style as water shooting through a fire hose. It is not known how he generates the pressure to create this effect.

Like this? Let us know!
Retrieved from "https://marvel.fandom.com/wiki/Aquarius_(Thanos%27_Zodiac)_(Earth-616)?oldid=4410844"
Community content is available under CC-BY-SA unless otherwise noted.