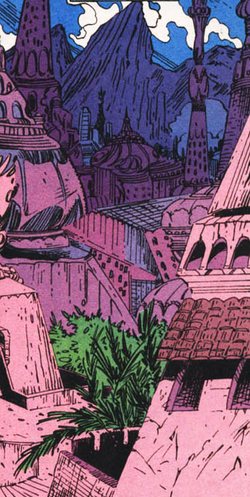 Aquilonia is the "Mightiest kingdom of the West" in the Hyborian Lands. It is one of the so-called Hyborian Kingdoms, realms created by the Hyborian tribes which once invaded the area of Hyboria from the frozen north.

Aquilonia was one of the nations to rose on the ashes of Acheron.[4]

Circa 10,900 BC (nine hundred years before the Age of Conan), Epeus the Sword-Wielder was king of Aquilonia.[5] Around that time, Nemedia, then ruled by King Bragorus invaded Aquilonia but was driven back.[6]

King Vilerus I had a great bridge to be built up upon the River Khorotas.[7]

During the lifetime of Conan, the privileges of the nobility created a shortage of farmland. The nobles used the right to claim otherwise fertile land as part of their private hunting grounds. In combination with the rising population of the country, this trend left many peasants with no land to tend to. This led in turn to ongoing efforts of the state towards western expansion and colonization of Pictland. Unsurprisingly, the Picts repeatedly attempted to drive settlers away and reclaim their hereditary lands. Making border wars recurring events.[10]

Conan the Cimmerian claimed the throne for himself during a civil war. His queen consort Zenobia was a Nemedian. Their children included the heir Prince Conn, Princess Radebund, and Prince Taurus. Publius served as Conan's chief councilor, Trocero, Count of Poitain as seneschal, Prospero of Poitain as de facto right-hand-man, Alcemides as the court philosopher, Dexitheus as High Priest, and Pallantides as commander of the Black Dragons.[10]

After 20 years of reign, Conan abdicated in favor of his son Conan II (Conn).[3]

Circa 9,500 BC, When it was at its zenith, Aquilonia annexed Zingara, Argos, Ophir, western Shem[3] Corinthia, and Zamora, which they treated with as subjected countries. Similarly, the Bossonians and other less powerful peoples were treated with growing contempt. Koth was practically tributary. Stygia, then Brythunia were defeated in battle.

The Picts started going and coming in Aquilonia, aided by the Nemedian priest of Mitra Arus who also helped the Pict chieftain Gorm how to mine and work iron into weapons. Many Picts joined the Aquilonian troops as mercenary, learning about civilized warfare before returning. Meanwhile, Gorm became chief of chief, and then moved his armies to war against Aquilonia. The invasion was halted by the Bossonians.

As powerful Nemedia was still free, the Aquilonian armies, mostly comprised of mercenaries and Bossonians, marched on the neighbor. This eastern war caused the Bossonian Marches to be lightly guarded. Once word of the Pictish's attacks on Bossonia, whole regiments of Bossonians left the campaign and return home where they defeated the Picts. That desertion was however the direct cause of the Aquilonians' defeat by the desperate Nemedians.

In retaliation, Aquilonia positioned regiments on the borders of the Marches. The Bossonian chiefs were lured into their encampment and massacred. The Aquilonians then attacked the people, ravaged the land and marched back from the borders.[1]

Without the Bossonians' resistance, Gorm (who was now an old man with his ambition intact) had his Picts swarm into Aquilonia's itself.

Zingara, Corinthia and the Shemites seized the opportunity to free themselves from Aquilonian rule. Whole regiments of mercenaries and vassals mutinied, marching back to their countries, looting and burning on the way. In addition to the Picts and the mercenaries' ravages, the Cimmerians invaded the land as well. The sum caused the destruction,[1] mostly attributed to both internal decay and the massive Pict invasion.[3] The Picts made themselves master of Aquilonia and massacred nearly all the inhabitants in the process.

A short age later, Gunderland was destroying by the Cimmerians fleeing from the north.[12]

Aquilonia had an advanced economy for its era, aided by the fertility of its land and by trade through the so-called Road of Kings. The latter being the main east-west trade route of the Hyborian Age. The profits from commerce have allowed the country to maintain one of the largest and better-organized military forces in the known world. It is often viewed as an empire instead of a kingdom. The imperial troops are known as the Black Legions due to the color of their armor. The personal guard of the king forms an elite unit, known as the Black Dragons.[10]

The Aquilonians used at least Aquilonian Gold Crowns,[13] and Aquilonian Silver Talents[14] (a talent being a measure).

The capital city is Tarantia. Aquilonia includes several provinces and regions of diverse culture and historical background. Attalus in the southeast is one of its major commercial centers and a stronghold of the aristocracy. Poitain in the far south is a fertile land of meadow lands and plains. Gunderland to the far north is a woodland with a climate similar to its neighbor, Cimmeria. The Bossonian marches in the west used to be the traditional border area, and long wars with the Picts have left their cultural marks. The Westermarck is a recently-settled western frontier and unstable due to frequent conflicts with the native population.

The Gundermen maintain a regional identity and have kept some primitive elements of Hyborian culture. Their warrior culture makes them outstanding soldiers. Gundermen pikemen and spearmen form the backbone of the Aquilonian army, and serve in mercenary forces across the Hyborian world. The Bossonians train their lads to become master archers. The mainstream Aquilonians either serve in the country's strong infantry or in its heavily-armed cavalry.[10]

Initially the Aquilonians worshiped the ancestral god of the Hyborians, Bori (or Borri). By the time of Conan, they were instead monotheistic worshippers of Mitra.[10]

Like this? Let us know!
Retrieved from "https://marvel.fandom.com/wiki/Aquilonia?oldid=5729646"
Community content is available under CC-BY-SA unless otherwise noted.