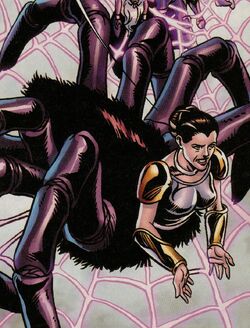 Arachne was a woman who claimed to be a better weaver than Athena, causing Athena to curse her into the form of a creature with a spider body instead of legs.[1]

Arachne was one of the many monsters employed by Hera's Olympus Group, and battled Hercules's allies[2] (as a way to avenge herself from Athena), and especially Spider-Man.[1]

She later appeared in New York City after Hercules became infested with the Spider-Island Virus.[3]

Arachne is a skilled weaver.[1]

Spider-Man mentioned Arachne the fact that her name was "already taken" by a member of Omega Flight, and proposed her "Spider-Woman", "Spider-Girl" and "Araña",[1] all names already used by spider-themed heroines.

Like this? Let us know!
Retrieved from "https://marvel.fandom.com/wiki/Arachne_(Earth-616)?oldid=5627274"
Community content is available under CC-BY-SA unless otherwise noted.