In human form, Tepania has tattoos on each cheek. In lizard form, Tepania is extremely large, has grey scaly skin, rows of spikes running down her back, a 9' tail, four fingers on each hand, three toes on each foot, claws on each of her fingers and toes, and sharp teeth and fangs.

Human who could shape-shift into a hulking, lizard-like creature (source of her power unknown)

Little is known about the life or career of Araoha Tepania before Tony Stark encountered her in her capacity as warden of the Mandarin's forced labor camp in Australia.

During her battle with Iron Man, she mentioned that "Tuatara" is the name of the lizard she was bonded with since birth. Iron Man's encounter with Tuatara began when S.H.I.E.L.D. and the Black Widow recruited him, as Tony Stark, as "bait" to investigate the kidnappings of several prominent scientists. However, Stark was kidnapped while the Widow was distracted by a battle with Iron Hand Hauptmann, who had been sent by Count Nefaria to attack Stark.

Stark awoke in a well-hidden prison camp, where he first met Tepania in her human form. Tepania told Stark that he and the other scientists would build technical devices for her employer, or die. She also informed him that they knew of the Black Widow's involvement and had removed his tracking implant.

Stark, undeterred, used the components of the device he was building to send a new signal to the Black Widow and S.H.I.E.L.D. Stark and the Widow were making quick work of the guards until Tepania arrived and transformed into Tuatara. Stark donned the Iron Man armor brought by the Widow and engaged Tuatara. The battle seemed to be a stalemate, with Iron Man unable to seriously injure Tuatara and lacking confidence against her due to his time as her prisoner. The stalemate was broken when Iron Man blasted her with tight beam sonics. Tuatara screamed in pain, and Iron Man's confidence returned. Seeing that the battle was lost, Tuatara burrowed away into the ground after ordering the destruction of all the records of her employer's involvement.[1] 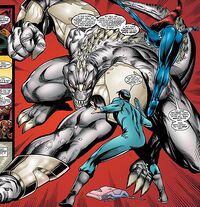 Tepania is skilled in hand-to-hand combat, and she has bragged that she has great organizational skills.

Superhuman strength at an unknown level

Sonic Weakness: Tepania appears to be vulnerable to sonic weapons as Iron Man's sonic weapons was able to hurt her, despite his repulsor weapons doing nothing to her.

Like this? Let us know!
Retrieved from "https://marvel.fandom.com/wiki/Araoha_Tepania_(Earth-616)?oldid=6948219"
Community content is available under CC-BY-SA unless otherwise noted.