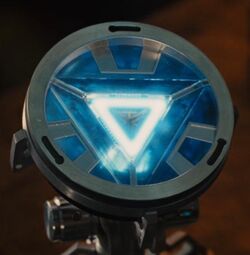 In this universe, the Arc Reactor was a device initially designed by Howard Stark, and later adapted by his son, Tony. A massive arc reactor provided power for the sprawling complex of Stark Industries until its destruction,[1] and later the Stark Tower.[2] This design was miniaturized by Tony to power a life-saving electromagnet in his chest, which had an energy output of 8 gigajoules per second.[3]

Further upgrades to the design allowed Stark to employ successive generations of arc reactors, most notably in powering his crowning achievement, the Iron Man armor. Early generations of Iron Man armor were powered by the same arc reactor technology as what had powered Stark's electromagnet device,[1] however poisoning from the palladium within the reactors were having an adverse effect on his health. This forced a radical redesign whereby Tony created a new element previously only theorized by his father years earlier. This new arc reactor had a massive power output advantage over previous arc reactors and was the first to power the formidable Iron Man MK VI armor.[4]

Since their inception, mini arc reactors have powered successive generations of the Iron Man armor as a force for good. They have also fallen into the hands of far less savory individuals and used to power further battle suits for criminal operations, and a fleet of robotic battle drones.[4]

Stark had the arc reactor in his chest removed after receiving surgery to remove the shrapnel from his chest. He later removed the element and then threw the decommissioned unit into the ocean.[5]

Stark soon returned to building arc reactor technology and used a number of them to power later generations of Iron Man.[6]

The Repulsor Tech node, as called on Earth-616, is a type of fusion power which derived from the Repulsor Technology of the Iron Man suit created by Tony Stark. It can be used as a source for clean energy as well as a powerful bomb, further modifications made along Rand Industries discarding the second possible application.[8]

During an attack made by suicide bombers created by Ezekiel Stane, Pepper Potts was gravely injured in a similar way Tony was in Afghanistan. Tony implemented this new technology into her, allowing her not only to survive the shrapnel near her heart, enabling surgery, but to heal quickly and control the reactor at will to create specific magnetic fields for protection or to levitate, and beams of energy.[9]

After the Skrull Invasion, Norman Osborn became the director of S.H.I.E.L.D.'s successor H.A.M.M.E.R., dismissing Stark, and got access to the Superhuman Registration Act's database containing the secret identities of almost every hero. Tony managed to erase the one property of S.H.I.E.L.D. before Osborn managed to open it, and in order to do the same with the backup in the Extremis in his body, he had to reset it, thus his entire body.[10]

In the end, Tony Stark fell into a coma-like state. Pepper's R.T. node was used to run Stark's body once more by using it to run the basic machine codes to keep Stark's Extremis-modified body working.[11] Another new R.T. node was implanted to Virginia Potts.[12]

After returning to life, Tony used the R.T. node to power his new Bleeding Edge armor as well as similar devices were used to create new technologies for his new organization Stark Resilient such as a Repulsor Car,[13] and empower the newly reconstructed Asgardia.[14]

Since he first used it, Tony used numerous R.T. nodes to empower any new armor.[15]

In this reality, a big Arc Reactor supplies the Stark Tower, the HQ of Stark Industries, with clean energy.

Tony uses a miniaturized version of this device in his chest, which apparently helps him to stay alive in addition to powering the Iron Man Armor.

Like this? Let us know!
Retrieved from "https://marvel.fandom.com/wiki/Arc_Reactor?oldid=6430281"
Community content is available under CC-BY-SA unless otherwise noted.