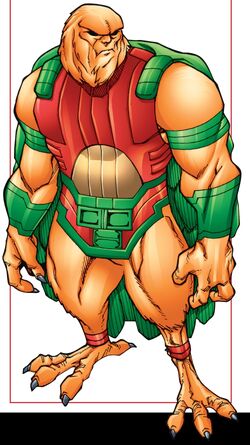 Most of the race was killed when the incubator cube of Galactus was opened and he committed his first planetcidal feast on their homeworld, Archeopia. The small fleet which escaped has since sailed the galaxy for uncounted centuries, now known simply as The Wanderers.[1] The Archeopian race would later be fully exterminated by the living planet Ego.[2]

Their planet would later be recreated after the Ultimates used Galactus' incubator to turn him into a life-bringer.[3]

Like this? Let us know!
Retrieved from "https://marvel.fandom.com/wiki/Archeopians?oldid=6438856"
Community content is available under CC-BY-SA unless otherwise noted.