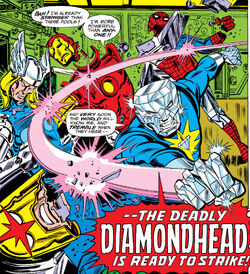 Arch Dyker no longer existed! But in his place was-- The Deadly Diamondhead!

Arch Dyker was a troubled child who grew to become a Golden Gloves boxing champion. Later, he turned to petty crime. While breaking into the South Hampton Science Institute to steal some precious gems, he accidentally tripped in front of a diamond-powered laser. Dyker found himself endowed with superhuman strength, diamond-hard skin and a freakish appearance. Calling himself Diamondhead, Dyker set out to make himself a master crime lord. He allied himself with Condor,[1] was stopped in his formative attempts by the hero Nova, although he soon escaped.

Dyker somehow came to the knowledge of the villain Sphinx, whom he called the Dreaded One and believed him to be a threat to life as well as his own private villainy. Dyker joined two other villains, Condor and Powerhouse, in a team dedicated to stopping the Sphinx at any cost. Called the Terrible Trio, their actions often broke the law, which brought them into conflict with Nova yet again.

Condor later captured Nova and brainwashed him into becoming the leader of the Trio. Dyker violently disagreed, but soon relented. The foursome used Nova's alien connections to procure a spaceship, but they were stopped by robots of the Sphinx. The Trio took whatever weapons were available and escaped, leaving Nova aboard the ship and to be stranded in space, although he later returned to Earth.

Eventually, the Sphinx captured Dyker, Condor, Powerhouse and Nova in order help him infiltrate the planet system of Xandar, the source of Nova's powers and the location of the powerful, planet-wide "living computer." As the Sphinx absorbed huge amounts of knowledge and energy from the Xandar computer, enhancing his powers dramatically, Nova led Dyker and the others (along with the hero team Fantastic Four) in stopping an invasion of Xandar by the alien Skrulls. Ultimately, the Fantastic Four ended the threat of the Sphinx with the help of the planet-devouring Galactus. Dyker, Nova and the others stayed on Xandar as their champions.

Later, the Spaceknight Rom encountered this team of "New Champions," hoping they would help him find his home galaxy. At the time, however, Dyker joined his fellow Champions (Protector, Comet and Crimebuster) in a final battle against the Skrulls. Dyker ultimately betrayed his allies to the Skrulls, who killed Crimebuster and shunted Comet and other soldiers to another dimension. Nova confronted Dyker, but in so doing had disintegrated the bodies of Xandarian and Skrull warriors. Although he defeated Dyker, Nova was so traumatized he instantly buried his memory of the event. Defeating the Skrulls, Nova returned his friends to their proper dimension. Presumably, Dyker was imprisoned.

He was captured by the enigmatic alien, the Stranger, and were imprisoned in the Stranger's Labworld for the alien to study him. He remained their until freed by Overmind.[2]

Dyker's subsequent activities remain unknown, including his whereabouts when Xandar's population was destroyed by the space pirate Nebula. Dyker was later discovered as one of the prisoners on the planet owned by the enigmatic Stranger, although his purpose for being there remains unknown. Dyker was among those prisoners who managed to escape when the Stranger was confronted by the hero Quasar. Dyker joined with other prisoners who were natives to Earth, such as the Presence and Jack of Hearts and managed to return to Earth with their help.

Eventually, Dyker resumed his life of crime and began taking assassination assignments. He was hired to kill a doctor who performed abortions but was stopped by the interference of Nova. Dyker reminded Nova of his activities on Epyrus-7, accusing him of mass murder. Nova's memories resurfaced and he battled Dyker fueled by rage and guilt. The hero Captain America offered to help, but Nova refused. He did take Captain America's glove, which contained an energy shield device and used this device to shatter Dyker's diamond-like form, apparently killing him. Captain America claimed this to be self defense, although Nova questioned such reasoning. It was later confirmed that his shattered body would regenerate.

After the events of Civil War, Diamondhead was seen stalking Nova, who was home on shore leave after the Annihilation War. Though he tried to attack him out of revenge for their previous fight, Nova effortlessly shattered his hand with a gravimetric blast and eventually the rest of his body when Diamondhead continued to resist. Nova attempted to turn in his remains to the police before they reformed into his body again, but the process was delayed due to Nova being unaware of the new Registration laws and requirements.

After the war between the Avengers and the X-Men, Diamondhead came out of hiding to attack Sam Alexander, the new Nova, bearing a grudge against the entire Corp and enraged that it managed to live on after Richard's death. Though Diamondhead was able to overpower the new, inexperienced Human Rocket, Sam eventually managed to blind him with a bright flash of energy and leave him stranded on a high plateau in the middle of the Arizona desert.

As a result of being exposed to the beam of a diamond powered laser, Dyker was mutated and gained superhuman attributes.


Diamond Physiology: The laser which struck Dyker transformed and augmented the tissues of his body, transforming them into solid diamond. Dyker's body continued to function normally, though exactly how this was accomplished remains a mystery. Dyker didn't sweat and his body generated no waste products. In fact, Dyker's entire internal structure seemed to have been transformed as well and has blended in with the rest of his body meaning that he had no visible internal organs or blood.

Dyker was an experienced boxer and formidable hand to hand combatant. Despite the increased density of his body, Dyker possessed the same speed, agility, and reflexes he possessed prior to his mutation.

Dyker's thuggish personality and temper often undermined his significant fighting skills, often enabling him to be defeated or incapacitated by far less powerful opponents. Also, despite the efficiency of his regenerative powers, Dyker could be killed. During his battle with Nova, Dyker's body was shattered but the pieces were scattered over a great distance, resulting in his death.

Like this? Let us know!
Retrieved from "https://marvel.fandom.com/wiki/Archibald_Dyker_(Earth-616)?oldid=6467393"
Community content is available under CC-BY-SA unless otherwise noted.