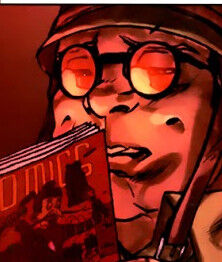 Archie the Gruesome was just one of many costumed operatives active during World War II who were recruited into the United States military. The purpose was to enlist such individuals in order to publish propaganda in the form of comic books that were commissioned by the United States military and published by Timely Comics. These comics were used to convince Americans to support the war and increase enlistment. Like many heroes recruited in this fashion, Archie's fictional exploits were few. For most of these early heroes, it was due to their deaths in combat.[1]

Presumably, much like the Young Allies,[2] Archie's fictional exploits may be based on actual events. For the sake of clarity, however, this article differentiates between the two.

Archie was apparently a street sweeper who was inspired by the hero Captain America and decided to take up a costumed identity based on his idol. As "Archie the Gruesome", Archie clashed with Big Joe, a fellow street sweeper who entered into a life of crime.[3]

Archie was drafted into the military after the United States officially entered into World War II. He was among the first men recruited into the Specialized Unit, Enhanced Soldiers led by his inspiration, Captain America. Archie was the unit's medic and when they were air dropped into Guadalcanal in August 1942 to fight, he was present and provided medical attention to fellow teammates Secret Stamp,[1] Slow Motion Jones and others.[4]

By 1944, Archie and his comrades were pulled from the Pacific Theater to participate in the Battle of Normandy and he was airdropped with his teammates in the Norwegian village of Sainte Mere Eglise. Following their victory, the Crazy Sue's celebrated with the Invaders.[5] Archie was present with the group during their battles to liberate France from Nazis and clashing with Nazi forces in Belgium.[6]

In December 1944, Archie and his teammates were in Saarlautern, Germany. There they were attacked by Nazi forces who decimated his teammates, the Victory Boys. The lone survivor of the Victory Boys was Piotr, whom Archie attempted to give medical attention to. Realizing that Piotr's wounds were too serious to help, he was ordered by the Young Avenger to shoot Piotr full of morphine to kill the pain while the Young Avenger put him out of his misery.[7]

Archie's subsequent activities are unknown.[8] However, evidence suggests that he died in battle during the war.

Presumably, Archie would have had military training as a field medic.

A street-sweeping broom; As a member of the Crazy S.U.E.'s, Archie would have had access to standard issue U.S. Army military weapons.

Like this? Let us know!
Retrieved from "https://marvel.fandom.com/wiki/Archie_the_Gruesome_(Earth-616)?oldid=5457060"
Community content is available under CC-BY-SA unless otherwise noted.