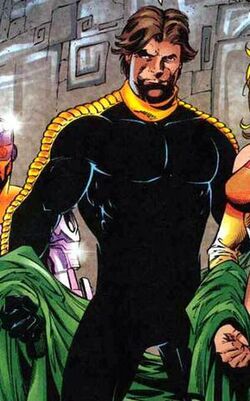 One million years ago, the Wanderers came to Earth from many worlds. There they faced extinction at the hands of spectral beings called Whirldemons. With a magical blade called the Sunsword, Prince Wayfinder created a new universe for the Wanderers, the Microverse, and imprisoned the demons. Wayfinder became the first Time Traveler.

One thousand years ago, Commander Arcturus Rann set out on a voyage to explore the Microverse. While his conscious mind spent a thousand years in suspended animation, his subconscious made contact with the Enigma Force. At intervals, astral copies of Rann would appear and become new Time Travelers. Some of them became Shadow Priests, who set up churches devoted to worship of Dallan and Sepsis (Rann's royal parents). All this activity prepared Rann to confront Baron Karza when he returned home. At the proper moment, the Shadow Priests shed their disguises and reunited with Rann, giving him the power to defeat Karza.

The Enigma Force came into play again when the Spacewall between the Microverse and the Macroverse (i.e. the Marvel Universe) began to break down and the Whirldemons escaped. Rann had lost his connection to the Enigma Force, which meant that many of the Time Travelers ceased to exist (or were inaccessible). While Rann tried to restore that connection, the Microns (with the help of Doctor Strange) went on a quest to find the Sunsword, drive back the Whirldemons, and repair the Spacewall.[citation needed]

Arcturus is a low-level telepath who once hosted the Enigma Force, which granted him vast power.

Like this? Let us know!
Retrieved from "https://marvel.fandom.com/wiki/Arcturus_Rann_(Earth-616)?oldid=6471090"
Community content is available under CC-BY-SA unless otherwise noted.