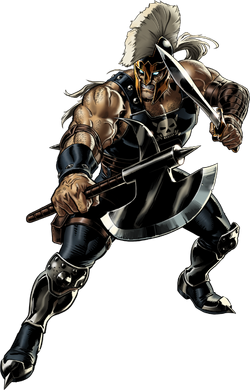 That is why I am here. To show you what true war looks like.

Ares is the Olympian God of War, and the half-brother of Hercules. Like him, Ares' immortality allowed him to survive to the modern times, always seeking war.[1]

His desire for conflict led Ares to join Dell Rusk's own version of the Avengers when the World Security Council decided to put the matter of Isotope-8 in their own hands after a research facility in San Francisco released large amounts of MGH/Iso-8 during an incident.

S.H.I.E.L.D. knew Rusk was behind something else, and decided to stop the spread of Isotope-8 in San Francisco, control victims mutated by the compound and stop the "reformed" villains Rusk put into the field. One of them was Ares, who not only cleared Test Subjects from the area, but also went after S.H.I.E.L.D. field teams. Ares fought Hercules, who was sent to stop him, and had to retreat.

Tony Stark later thought Ares could be reasoned with, Hercules was sent to speak to Ares, and managed to make him join the Alliance, with who Ares fought Dell Rusk's Avengers, and helped to expose their true identities as villains to the public and stop them before the media could think there was a civil war among S.H.I.E.L.D.'s ranks.

Ares defeated both Moonstone and Venom after Dell Rusk sent his Avengers to restore the order in conflicts he secretly started. Rusk's Avengers were finally put out of circulation and S.H.I.E.L.D. managed to ruin Dell Rusk's plans, for the moment.[1]

Seemingly those of the Ares of Earth-616.

Seemingly those of the Ares of Earth-616.

Like this? Let us know!
Retrieved from "https://marvel.fandom.com/wiki/Ares_(Earth-12131)?oldid=6057492"
Community content is available under CC-BY-SA unless otherwise noted.