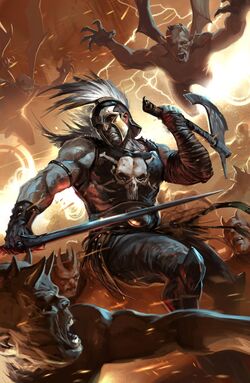 The chain of command. Rules of engagement. This Geneva Convention thing. Medical evac. Supply lines. The white flag. The Red Cross. Worrying about evacuees and refugees. Taking prisoners. Losing the battle but winning the war. Cursed diplomats. The proper standard of grooming. Sensible things like having enough bullets before you go into battle. That's the dung my sister cares about. I'm the other God of War.

Ares was a member of the Olympians, a group of humanoid beings that hail from the pocket dimension of Olympus. He was worshiped by the humans of Ancient Greece and the Roman Empire as their god of savage warfare.[4]

The son of Zeus and Hera, Ares was worshiped as the god of war in ancient Greece and Rome. Ares' dissatisfaction with Zeus' rule of Olympus began after Zeus' decree that worship of the Olympians should be allowed to die out.

On three times he attempted to conquer Olympus, twice in league with his uncle Hades, god of the Olympian underworld, but each time he was thwarted through the efforts of his half-brother, Hercules, and Hercules' allies. Ares hated Hercules ever since he had killed Ares' monstrous Stymphalian Birds in the days of ancient Greece.

He sired many children, including:

During the Trojan War, he was one of gods to observe the event.[14] Despite Zeus forbidding the Gods from interference,[15][14] Ares acted on a few occasions:

Later, Ares would hate the movie "Troy", stating that it made him sick.[9]

Ares fought the French during the Battle of Agincourt.[18]

Like many Olympians, Ares accepted the rule of Aphrodite during an apparent leave of absence from Zeus. Olympus was relocated to the planet Venus and most of the Olympians adopted their Roman names. Ares took up the name Mars during the time. In 1949, Mars was among the various Olympians gathered by Aphrodite (now calling herself Venus) as potential subjects to make her mortal lover Whitney Hammond jealous. In the end Samson was chosen over the others.[19] In 1951, Mars was summoned by Jupiter to assist Venus along with the Asgardian thunder god Thor to assist Venus in defending New York City from the insane inventor John Dark and his mechanized army. Mars attempted to appeal to the pride Dark felt when he previously served in the United States Army, but this did not succeed and Thor was forced to slay Dark.[20] After this Ares resumed using his Grecian name and withdrew from interacting with the mortal world once again.

In recent years, Ares tried to set two of Earth's nations at war with each other. The conflict threatened to spread over all of the Earth, until Ares was forced to put an end to it by his half-sister Venus, whom he has long sought in marriage, and the hero known as the Sub-Mariner. Venus and the Sub-Mariner extracted a pledge from Ares not to engage in further warmongering on Earth.[21]

This did not stop Ares from joining with Hera in order to torment Hercules personally, when Ares briefly possessed the mortal Thunder God Eric Masterson to battle his half-brother.[22]

Ares tired of his own warmongering when he realized that was why the other gods despised him and decided to live a normal life. He gave up his position as god of war, but maintained his skills, weaponry, and immortality. On Earth, he set himself up as a builder/carpenter. He would later father a son with an unidentified mother.

Still insistent that his son have a mortal upbringing, Ares returned to his life as a construction worker in Dover, New Jersey where he worked during the enactment of the Superhuman Registration Act. Immediately following the superhero Civil War over its legislation, Iron Man and Ms. Marvel traveled to Ares' construction site to recruit him for their new Avengers team. Agreeing that the heroes had ruined his civilian cover, Ares eventually agreed to join the team after Iron Man threatened to deport him to Olympus if he did not register with the U.S. government and promised a salary similar to that of his construction job.[9]

He immediately proved himself by playing a big role against an Ultron infected Iron Man, assisting against a symbiote mutated city, arresting Doctor Doom, and taking part in the battle against the Hulk and his Warbound. Ares was in charge of punishing his half-brother Hercules for aiding the Hulk.[24] He however, failed to contain and recapture Hercules after he escaped and even lost to him in single combat. His final act in the Mighty Avengers was aiding them against an enormous Skrull invasion.[25]

Although Ares was able to get along with most of the Mighty Avengers, his morals and tactics on saving the Earth for the greater good differed. After the invasion, Ares remained a registered superhuman and accepted a place in Norman Osborn's Avengers alongside Mighty Avengers teammate Sentry. He did not understand his former team leader Carol Danvers' (Ms. Marvel's) reluctance to work for Osborn. He viewed his new alliance with the ex-villain simply as continuing the fight that the original Mighty Avengers had started on terrorist-level superhuman, and natural threats against America and even the entire planet.[26]

Misled into believing Asgard's presence on Earth and Thor's exile from that same kingdom were a part of an evil plot begun by Loki (who he was also led to believe was leading the Asgardians), Ares was charged with leading the assault on Asgard. While many of his Dark Avengers teammates and members of the Hood's forces posing as Initiative teams took on Thor, Ares found himself in battle with Balder. Though he believed Balder to be under Loki's influence, the arrival of an injured Heimdall and the truth he shared, led Ares to realize his mistake. Enraged at having been manipulated, he confronted Iron Patriot and vowed to rip his head off. Before he could launch his attack, however, Iron Patriot signaled for the Sentry. Newly possessed of a need for more power, he silently began his assault on Ares and after several powerful blows he grabbed Ares by both arms and ripped him in half, killing him.[27]

Ares was next sighted after Alex's (Phobos) death on the fields of Elysium. He asked his son if he did all he could and then stood proudly with him. Chaos King later brought Ares back to life to fight him. Ares fought well but was overtaken by the unlimited power of the Chaos King and later returned to Elysium.[28]

After discovering the material known as Isotope-8 in the Battlerealm, the Collector waged in a tournament against the Grandmaster, a game known as the "Contest of Champions," in which both Elders used summoners as consultants to bring players from across the Multiverse and have them fight for the ISO-Sphere.[29] In order to showcase the power of the Iso-8, the Collector, on advice of his summoner the Maestro, used it to bring into the contest even people from the afterlife, thus he pulled Ares from Elysium back to the land of the living.[29]

During Hydra's takeover, Ares became a member of Champions of Europe.[31] Together with Enigma and Squirrel Girl, the team was able to free Paris from Hydra.[32]

Ares allied himself with Sindr, the Queen of Cinders, and began hunting the Babysitters Club in order to capture Odin's baby daughter, Laussa. He was chasing them in his all-terrain vehicle, but Wonder Man broke the bridge they were on in half, allowing the club to escape.[33]

Ares then targeted Sword Master and Shang-Chi, wanting to get his hands on Sword Master's Sword of Fu Xi.[34] He and his Dragonborn Warriors ambushed the heroes,[35] and after the brief battle he was successful in getting the sword, revealing his plan to use it in killing another fellow god, Davi Naka. While leaving, Ares was belittled by Shang-Chi for his cowardice and stupidity, even comparing him to Chiyou. Ares took the sword to Orgarb, so he could allow Ares to activate the sword power; however, despite the dwarf efforts, Ares was unable to use the sword. Then Sword Master and Shang-Chi catched up to him wanting to retrieve the sword.[36] Seeing that Sword Master was the only one able to activate the sword's power, Ares and Orgarb tried to capture him in order to use his blood, but Shang-Chi stopped them by using the sword to destroy the Olympian's hammer and suggested a deal that in exchange for Sword Master and Shang-Chi helping him, Ares would help them find Sword Master's father, Professor Lin. Sword Master was against this idea, but Ares assured him that the Olympians weren't evil deities. Ares accepted the offer and also revealed that his son, Ismenios was abducted by Davi Naka and wanted to use the sword so he could punish the kidnapper. After armoring themselves they went to Madripoor, via a portal.[37]

They were able to locate Ismenios within a temple and freed; however the destruction of the cage activated the temples stone dragons and summoned Davi Nakia.[38] They tried to ambushed the Mother Goddess, but were easily defeated. She explained to them that Ismenios had tried to plunder Atlantis' treasure hoard during the absence of its Sea Serpent, but he was caught by Namor. Due to her duty to protect all Dragons, she rescued Ismenios and imprisoned him for his own protection and to placate Atlantis. Ares admonished his son for attacking Atlantis, but forgave him, since he himself would have done the same thing. Dismissing the whole ordeal was a misunderstanding, he ended his deal with Sword Master and Shang-Chi, and attempted to leave the temple with Ismenios, but was prevented by Naka, warning the group that despite her efforts, Atlantis was still outraged over the disappearance of their sea serpent and ordered them to find the missing guardian or else face the wrath of the Atlantis.[39]

Olympian Physiology: Ares possesses the conventional superhuman physical attributes of an Olympian god.[40] However, some of his powers are greater than that of most Olympians, such as:

Master Combatant: Ares is a master of a variety of hand-to-hand combat skills and all of the ancient Greek forms armed and unarmed combat. Also, he has mastered all forms of weaponry, both modern and ancient.[40] He is well versed in military tactics, torture, and combat engineering. Ares is one of the most talented and ruthless warriors that has ever fought on Earth.[41]

Master Marksman: He is extremely accurate in throwing projectiles and sharpshooting.[41]

Master Tactician: He has a vast amount of military history particularly focusing on battles and wars that involved Greek and Roman (or Italian) soldiers and armies.[41]

Class 75; Ares possesses greater strength than most Olympian gods and lifting (press) up to 70 tons.[41]

Olympian battle armor; At one time, he possessed the Gauntlets of Ares, which made its wearer gain strength comparable to Hercules. He has since passed these on to his daughter Hippolyta.

Like this? Let us know!
Retrieved from "https://marvel.fandom.com/wiki/Ares_(Earth-616)?oldid=6077053"
Community content is available under CC-BY-SA unless otherwise noted.