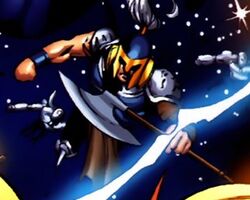 Ares had become a Selects when the Phalanx conquered Earth. Three decades later, the Nova Corps returned to Earth to remove one of the last Phalanx stronghold and Ares was dispatched with other Selects to help defend the Phalanx.[1]

Seemingly those of Ares (Earth-616)#Powers.

Like this? Let us know!
Retrieved from "https://marvel.fandom.com/wiki/Ares_(Earth-8041)?oldid=4960736"
Community content is available under CC-BY-SA unless otherwise noted.