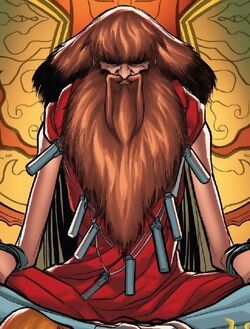 Mojo's race did not evolve much because of their inability to stand upright, until a scientist named Arize developed exoskeletons that allowed a fast technological revolution. However, some members of the race refused to use them and called themselves the Spineless Ones. Instead, they used motorized platforms to transport their bodies. They also became the rulers and demanded a race of slaves to do all the tasks they could not or would not do. Arize created the slaves, humanoid beings, using genetic engineering and basing their appearance on the "demons" of the Spineless Ones' nightmares - which were actually the characters of TV broadcasts of Earth-616, somehow scattered throughout their timeline and perceived by the Spineless Ones.[2] Unknown to the Spineless Ones, Arize secretly planted the seeds in their genetic make-up to eventually turn on their masters and rule Mojo-world justly. Arize was banished by the Spineless Ones when he refused to build weapons for them.[3]

It was revealed that because of Mephisto's manipulation of Shatterstar by sending him back in time to the Mojoverse (along with Rictor), he was discovered and experimented on by Arize who created Longshot from his DNA, essentially becoming his father. This created a paradox when Longshot impregnated Dazzler who then gave birth to Shatterstar. Longshot and Dazzler were mindwiped to forget the pregnancy and the Shatterstar infant was sent 100 years to the future in order to maintain the consistency of the time line.[4]

Eventually, Longshot returned to free the slaves and deposed Mojo, with the help of Mojo's upright, more human looking (although yellow) clone Mojo II. However, Mojo II turned out to be just as bad as his predecessor and Longshot had to defeat him as well. After Mojo II was ousted Mojo reclaimed his position and became the leader of Mojo World once more.[5]

The Historians of Tales to Come

Mojo learned of the rival network overtaking his ratings and decides to air a special in which Spiral hunts down and kills Arize. X-Factor investigate the attack and converge at Arize's cabin. X-Factor managed to stop Spiral before she can kill Arize. He apologized for he future actions Arize and Spiral, decided to join forces to break Mojo’s endless cycle of oppression.[6]

The Slaves of Destiny

Mojo tried to hunt down Arize but he escaped to Earth. He arrived in Afghanistan and the X-Men found him their thanks to Cerebro. But Mojo and his retrieval team arrived to find the fugitive, but they were no match to the X-Men. They retreated back to the Mojoverse. Mojo was humiliated by his team’s embarrassing defeat on live television that he declares he can create his own race of slaves instead of retrieving Arize.[7]

It remains unclear if that adventure was lived by Arize or by an alternate counterpart,[8] notably because of the lack of clearness regarding the potentiality of an unique Mojoverse.[1]

Complete wavelength signal absorption immunity: Contrary to the other Spineless Ones, Arize was somehow immune to the absorption of signals from Earth, and consequently wasn't driven insane by them.[1]

His name may be a play on "Arise" because his technology allowed the Spineless Ones to move.

Like this? Let us know!
Retrieved from "https://marvel.fandom.com/wiki/Arize_(Mojoverse)?oldid=5734379"
Community content is available under CC-BY-SA unless otherwise noted.