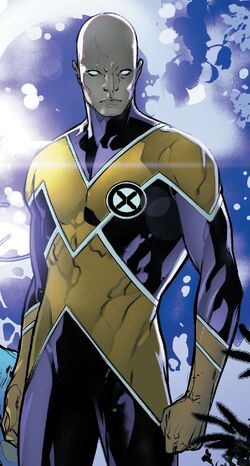 Always hard to make decisions. Always tough to know when to let go.
When to give up. When to know enough is enough.
And then there are some who never learn.
And then there are others who never know when enough is enough.
Who aren't stopped by common sense, or even death.
And people like that...you want to keep an eye on. Because you never know where they will lead you.

Armando was born different from other children. By age four, he was bald, his arms were longer than normal, and his eyes seemed to change. His father abandoned them around this time, and his mother blamed Darwin for his mutation.[2]

He grew up in the face of rejection, with even his own mother despising him, but he didn't hate her for that. He did everything he could to make her love him. A day came when he was asked to take an IQ test. Unknown to anyone at the time, Armando's desire to impress his mother subconsciously activated his mutant power and allowed him to test off the charts. He was quickly enrolled in a renowned boarding school, the Biltmore Academy for Advanced Education, but he was sent away mostly because his mother still hated him.[2]

Although his teachers loved him, he was bullied constantly by other students. One day the bullies put his head in the toilet and Armando noticed he could breathe underwater. He lifted his head out and began fighting back, feeling his arms become tough, almost like cement when he punched them. The bullies fled and Armando never brought up what had happened.[2]

His mother then became a heavy smoker. One night she fell asleep with one of her cigarettes still lit, accidentally setting their house on fire. Armando carried her out, unaffected by the flames to the astonishment of firefighters and paramedics. Tests were done at the hospital, and scientists were brought in. Armando was told he was a mutant and was nicknamed "Darwin, the Evolving Boy" (after Charles Darwin) because he seemed to adapt to every condition the scientists could think of. For example, they placed him in a pitch-black room and he gained night vision. There was even a lengthy report that was published about Armando.[2]

Unfortunately, his mother continued to reject him, denying that she could ever give birth to such a thing. Dejected, he attempted to commit suicide by jumping off the roof. Instead, he became so light and soft that he almost bounced when he landed on the ground. After talking about what happened with the school psychiatrist, he was told that 'someone who works with other kids like him' had read about Armando and was interested in meeting him. This person turned out to be Moira MacTaggert.[2]

Moira MacTaggert recruited Armando as one of her "fosters." He was in the first team, along with Vulcan, Petra, and Sway to attempt to rescue the X-Men from Krakoa.[4]

While Petra and Sway were killed by Krakoa, Darwin and Vulcan were swallowed in the earth by a combination of Sway and Petra's dying powers. Darwin absorbed the remains of the two girls and then converted himself into energy to fuse together with Vulcan. This gave Vulcan the powers of Darwin, Petra, and Sway.[5]

Years later, Rachel Summers managed to expel Darwin's presence from Vulcan, who then took off for space. While dealing with the shocking revelations of the truth about Krakoa and Vulcan, Beast found out that Darwin was still in fact alive. He was brought back to the Xavier Institute, where Beast determined Darwin was now a being of pure energy. While not conscious, he was shown to still have brain activity and was still alive, located at the X-Mansion. Once separated from Vulcan, Darwin's abilities caused him to develop a physical form once more.[6]

The Rise and Fall of the Shi'ar Empire

When the X-Men (including Warpath, Havok, Polaris, Marvel Girl, Nightcrawler, and Professor X) left to go hunt down Vulcan and stop him from destroying the Shi'ar, it was revealed that the Professor brought Darwin with them with hope that his friendship with Vulcan would help. When Shi'ar agents abducted Professor X, Darwin followed, and secretly jumped onto their spacecraft as it fled.[7]

After successfully rescuing Xavier from his captors, Darwin was well on his way to freedom when D'Ken was revealed to be alive and well. Recaptured by the Imperium guards, Darwin failed in his attempt to rescue his mentor and reluctantly accepted Vulcan's offer of becoming Best Man at his and Deathbird's wedding.[7]

Though obviously against the union, Darwin attended the wedding - albeit in shackles - and was caught in the crossfire when the X-Men and Starjammers attacked. Fearing his great day to be completely ruined by the interference, Vulcan trapped Xavier within the M'kraan Crystal. Naturally fearing for his mentor's safety, Darwin followed Xavier into the depths of the crystal and rescued him. He was taken to the X-Men's spaceship with Professor X and Lilandra Neramani sent the ship on its way back to Earth.[8]

Darwin reappeared along with the X-Men and fought against the Marauders, Purifiers, Predator X, and Cable.[10]

Sometime after the birth of the first mutant since M-Day, Darwin went in search of Professor Xavier because of rumors that he was alive again. While searching, Darwin encountered Nogor the Talisman, a Skrull impersonating Longshot. While in Detroit, the pair were attacked by Jazinda and She-Hulk who were trailing Nogor.[11][12]

Meanwhile, Darwin's father hired X-Factor Investigations to help him find Darwin because he felt bad for walking out on him and his mother when he was younger.[11] After reuniting father and son, it was revealed that Hector actually wanted Darwin only to hand him over to the mysterious Karma Project. Darwin was subsequently saved by X-Factor, and agreed to join the team.[13]

After joining X-Factor, Darwin helped to save Lenore from the assassination attempts of Cortex,[14] relocated to New York City,[15] rescue the Invisible Woman from Doctor Doom,[16] and battle Bolivar Trask and his MRD.[17]

After inadvertently handing Pip the Troll over to Hela, the X-Factor crew journeyed to Las Vegas to rescue him.[18] In Vegas, the team encountered Hela's undead warriors. With help from Thor, the team held their own, but the key to winning the battle was Darwin taking on gaining Hela's powers and using them against her.[19]

Unfortunately, taking on Hela's death powers seems to have had negative effects on Darwin, who chose to leave the team for a sabbatical.[20] While wandering in the desert, Darwin experienced a dream or vision during which he battled the dragon-like Sirrush and encountered a sheriff named Tier, who claimed to be the son of Rahne Sinclair.[21] Armed with this unsettling information, Darwin began a trek back to New York to warn his friends.[22][23]

During his sojourn, Darwin began hearing voices telling him about Tier, and Darwin decided to kill the child himself instead of approaching his former comrades. Darwin began hunting the child, but was prevented by Tier's guardian, Werewolf by Night.[23]

In Pennsylvania, Darwin had successfully incapacitated Werewolf by Night, and had cornered Tier, only to be thwarted by the interference of Vanora and Rictor. Although momentarily caught off guard by Rictor's restored mutant powers, Darwin remained determined to continue to track Tier and kill him.[23]

Compelled by forces beyond his understanding, Darwin continued to track Tier to New York City where Tier tried to meet with X-Factor. However, when Darwin arrived at X-Factor Investigations Headquarters, he lacked the nerve to actually kill Tier.[24] Because he was unable to kill Tier to avert the Hell on Earth War, Darwin elected to rejoin X-Factor to fight the Hell Lords.[25]

After the Hell on Earth War, Darwin was separated from the others and traveled back to Las Vegas to find Hela and force her to fix him. While searching for Hela, Darwin encountered a recently resurrected Monet. The pair had a one-night stand. Afterward, Hela found Darwin, but he refused her help.[26]

Following the establishment of a mutant country in Krakoa by Charles Xavier, Darwin became one of the countless mutants to settle in this new nation. When a group of X-Men were sent to The Vault, a place where anyone trapped inside could remain there for subjectively thousands of years, to capture Serafina, the three mutants selected for the mission were Darwin, Synch, and Wolverine (Laura) since they would be able to survive the temporal changes inside it. As soon as the three entered the Vault, they lost touch with the X-Men.[27]

During their first day, while engaging the Children of the Vault in battle, Wolverine and Synch killed most of their foes while Darwin's head got caught in a water bubble from Sangre. After seeing her teammates killed, Aguja angrily killed herself by projecting a force field that destroyed everything around her in an attempt to kill her foes.[28]

However, Darwin and his teammates recovered, with Darwin recovering due to his adaptation powers. The team then spent 100 years inside the Vault gathering intelligence on the Children. Darwin's adaptation powers slowed or prevented him from aging and learned that City could resurrect any Children that were killed through cloning in order to continuously evolve them. City became interested in Darwin's power and captured him so it could learn how to create a new generation of Children. Wolverine was also captured. After Synch fled and returned to the Vault, with 100 years passing by, he rescued Wolverine, but during his rescue of Darwin, Darwin was killed by City so it could use his powers to create a new generation of Children. Synch and Wolverine were later killed by the Children, but Synch was able to make telepathic contact with X and ensure everything they learned about the Vault was passed onto his resurrected form. Wolverine and Darwin were also resurrected.[29]

Darwin is a mutant with an extremely malleable physiology, including:

Like this? Let us know!
Retrieved from "https://marvel.fandom.com/wiki/Armando_Muñoz_(Earth-616)?oldid=6432135"
Community content is available under CC-BY-SA unless otherwise noted.