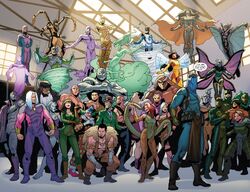 After reforming the Masters of Evil with Atlas, Fixer, Klaw, Moonstone, Tiger Shark, and the Wrecking Crew, Baron Helmut Zemo decided to create an even bigger team of villains in order to expand the enterprise of a twisted version of Captain America that had replaced the real one due to the Red Skull's machinations using the sentient Cosmic Cube named Kobik.[2]

As part of Captain America's plan to take over the United States, Baron Zemo had the Army of Evil attack Midtown Manhattan in the name of the countless of villains whose lives had been tampered with by S.H.I.E.L.D. in the super-prison of Pleasant Hill. The real purpose of the attack was to lure out as many superheroes as possible. Baron Zemo subsequently had the Army of Evil teleport away, and used the Darkhold to boost the powers of Blackout to trap half of the island in a dome of Darkforce, isolating the countless of heroes in the scene from the rest of the nation.[3] The Army of Evil later fought off any remaining heroes in Washington, D.C. as Hydra moved toward the capital to secure its takeover of the country.[4]

After Hydra took over the United States,[5] Hydra Supreme Steve Rogers decided to place the Army of Evil in stasis, being wary of what they could do if they remained free.[6] Only a few remained free, namely Mister Hyde,[7] Kraven the Hunter,[8] and Blackout[9] (who would later be killed by Maria Hill in order to release the Darkforce dome over Manhattan).[10] When a contingent of American superheroes who opposed Hydra's regime known as the Underground launched a massive offensive against Hydra in Washington DC, Baron Zemo was ordered to awaken the Army of Evil. He was stopped by Black Panther and Winter Soldier before he could accomplish his task.[6] When the Hydra regime ended,[11] the Army of Evil was likely released from stasis and were either forced to disband or were arrested by the authorities.

Like this? Let us know!
Retrieved from "https://marvel.fandom.com/wiki/Army_of_Evil_(Earth-616)?oldid=6473644"
Community content is available under CC-BY-SA unless otherwise noted.