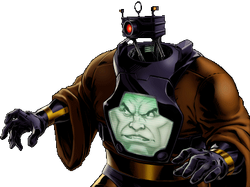 Hair
No Hair At All (originally brown)
Unusual Features
Zola has an ESP Box instead of a head. A three-dimensional hologram of his original face appears in a viewscreen on his chest. The ESP Box enables Zola to see and hear by psychic means, as well as to control his genetic creations telepathically.
Origin
Origin
Human whose consciousness has been transferred into a Robot
Reality
Earth-12131
Creators and Appearances
Creators
Playdom
First Appearance
Marvel: Avengers Alliance
(March 1, 2012)

Arnim Zola. I knew something was missing from Hydra. Turned out it was a guy with a TV for a body.

The foremost biochemist of Hydra, Arnim Zola, was hired by the Red Skull to create living weapons for the terrorist organization. He fought Captain America during World War II and preserved in time after transferring his mind to a robotic body.[1]

So Shall Ye Reap

Arnim Zola was under the command of the Hydra elements during the organization's alliance with the Maggia to attack the HQ of Wonder Man's company in order to steal his technology. During the attack, Wonder Man fought Arnim Zola while the Alliance defended him from other Hydra and Maggia soldiers. Zola escaped, but not before causing an explosion as a distraction, in which Wonder Man was heavily injured.[1]

Seemingly those of the Arnim Zola Earth-616.

Seemingly those of the Arnim Zola of Earth-616.

Like this? Let us know!
Retrieved from "https://marvel.fandom.com/wiki/Arnim_Zola_(Earth-12131)?oldid=6057494"
Community content is available under CC-BY-SA unless otherwise noted.