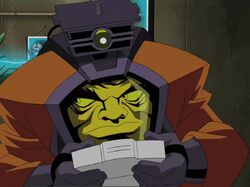 Dr. Arnim Zola was a brilliant Nazi scientist during World War II. He experimented with creating monsters to aid the Nazis and Hydra in their global conquest. Zola survived the war by downloading his brain into a robotic body with his face projected on a screen.

His most notable creation are the Doughboy minions. He often gives Baron Zemo a medical check up every week about his condition. He even allows him to borrow the Doughboys to distract the Avengers while Zemo gets inside the Avengers Mansion to kill Captain America. But the plan failed, as Zemo returns to Zola's lair, he discovered Zola's unconscious body surrounded by the Enchantress and the Executioner in an offer to form the Masters of Evil to destroy the Avengers.[3]

After the recruitment of other villains into the Masters of Evil is complete, they went into the Mansion to defeat the Avengers in an ensuing battle, only Zola stayed behind to guard their lair.[4]

When the Enchantress and her Executioner came back with the Norn Stones, he was among the Masters of Evil with new members waiting for them. Though Zemo ordered everyone to seven separate locations to guard the stones, Zola stayed behind again for he had no hero to fight.[5]

Later, the Enchantress along with the Executioner came to find out where Zemo was. He told her he was watching both Chemistro and the Living Laser when she made them offers, and was concerned with the Grey Gargoyle's fate. She then threatens him by ordering him to tell her where Zemo was or she would make him "learn" Grey Gargoyle's fate. He refuses and allows both Enchantress and Executioner to be swallowed in a surprise attack by Doughboy. After he thinks he's won and strokes Doughboy, Zola watches in a horrified state as his pet solidifies and explodes by Enchantress from the inside. She then tells him that he just made a fatal mistake and knocks out Zola with a blast, with Zemo watching the whole thing on a security camera.[6]

Zola is never seen again. However, when Nick Fury is looking for Skrulls, a picture of Arnim Zola appears, possibly meaning that he is still alive.[7][8]

Seemingly those of Arnim Zola of Earth-616.

Seemingly those of Arnim Zola of Earth-616.

Like this? Let us know!
Retrieved from "https://marvel.fandom.com/wiki/Arnim_Zola_(Earth-8096)?oldid=6117792"
Community content is available under CC-BY-SA unless otherwise noted.