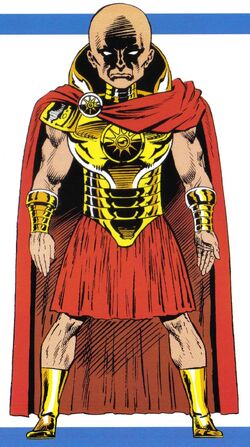 Aron was a relatively young member of the Watchers, an alien race of immortal observers of the universe. When Uatu, the Watcher assigned to Earth (and incidentally Aron's uncle), was brought to the Watcher home-world for trial, Aron became intrigued by Uatu's break from the Watcher's traditional code of non-interference.[1] Initially hesitant, the elder Watchers allowed Uatu to mentor Aron while watching Earth. The rebel Watcher Uatu could be a better teacher for a rebel youngster than other, more conservative Watchers. Uatu instructed Aron on the non-interference and the passive observation.[citation needed]

Excited about adventure, Aron attempted to interfere on behalf of the superhero team Fantastic Four, while they were aiding the race of Inhumans who lived on the moon.[2] Aron was prevented by Uatu. However, Aron decided that he wanted to live adventures, and the first step to do so was avoiding being noticed by the Watchers. He devised a means to do so, with a special uniform.[citation needed]

Soon after, Aron replaced the Fantastic Four, Frightful Four, and the Ms. Marvel (Sharon Ventura) with their respective clones, placing the others in suspended animation (The false Fantastic Four included the "spiky" version of the Thing and the rocky version of Ms. Marvel).[6] With these pawns, Aron acted out his desires for adventure, allowing the clones to relive the real team's earliest adventures.[citation needed]

But Aron also managed to spoil the Fantastic Four's reputation after they performed several acts against the public interest, because the clones were fanatic and lacking the mercy of the originals. Nobody suspected from the change, but the team managed to turn Mole Man hostile again and tried to impose a Fantastitax of 50$ to every New Yorker.[citation needed]

The superteam known as the Avengers investigated the Four's behavior, uncovered Aron, and released his captives, who defeated their counterparts. Aron allowed everyone to return to their respective places on Earth, and placed the clones in suspended animation before teleporting his entire facility to a cave on Jasper National Park, Canada.[citation needed]

Aron then revealed that he had never been really helpless. He teleported the Frightful Four to the Vault prison and the false Fantastic Four to his own headquarter, where they would be placed in suspended animation. Aron would analyze their dreams and get the excitement he longed. He then teleported all his base to an unrevealed location, probably still on Earth.[citation needed]

At another time, the villain Doctor Doom managed to discover Aron, and siphoned a portion of Aron's cosmic energy for himself.[7]

In an attempt to regain it, Aron masqueraded as Uatu in order to manipulate the Fantastic Four to defeat Dr. Doom and have him relinquish his power. Once the elder Watchers learned of Aron's disobedience to the code of non-intervention, they brought him to the Watcher home-world to stand trial, but he managed to escape their grasp.[8]

Later Aron was involved in a scheme with an evil Reed Richards from another timeline who called himself the Dark Raider. Eventually Uatu converted Aron into energy into recreating The One after he was destroyed by the Celestials.[9]

An expert in alien technology and history of the universe

His armor provides protection against the Watchers' detections.

Like this? Let us know!
Retrieved from "https://marvel.fandom.com/wiki/Aron_(Earth-616)?oldid=5722225"
Community content is available under CC-BY-SA unless otherwise noted.