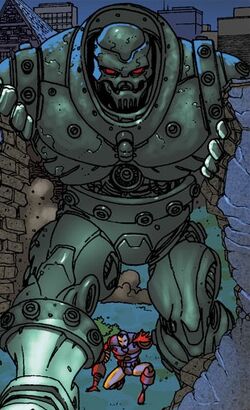 During the Cold War, industrialist Howard Stark was commissioned by the United States government to build a last-resort weapon only to be activated in case of a Soviet invasion in America.[2] As part of Project Tomorrow, Stark developed a prototype weaponry system named Arsenal[3] of which there were two units: Arsenal Alpha and Arsenal Beta. Both units' programs consisted of executing a plan called "Scorched Earth" in case of foreign occupation; the destruction of the critical infraestructure of New York and surrounding areas. Whereas Arsenal Beta possessed an artificial intelligence modeled after Howard's own engrams, most of the computing power of Arsenal Alpha was used to list targets for destruction in New York.[2] Arsenal Alpha was attuned to the WWV time signal, and would remain in sleep mode for as long as the signal continued being broadcast, meaning the country was not in enemy hands.[1]

Once the Cold War wound down, the Arsenal units were deemed too dangerous and they were stored away under the secret Project Tomorrow laboratory beneath Stark Mansion in Central Park.[4] Arsenal Beta was stored in a secret lab right beneath the building, while Arsenal Alpha was kept in a shaft next to an underground submarine pen outside the footprint of the building's foundation. Due to the nature of the robots, their existence became a secret matter of national security.[2] Both Arsenal units remained dormant for decades. The Stark Mansion was inherited by Stark's son Tony, who turned it into the headquarters of the premier superhero team the Avengers shortly after becoming a superhero himself, Iron Man. Arsenal Beta was accidentally awakened and confronted the Avengers two times,[5][3] but was ultimately destroyed by the Hulk.[6] The presence of Arsenal Alpha went unnoticed by the Avengers due to the location where he was stored, and he survived all the damage and reconstruction the Mansion went through over the years.

After Tony Stark became Secretary of Defense, Senator Joe Zimmer informed him of the existence of Arsenal Alpha. With Avengers Mansion having recently become a sovereign territory, Zimmer feared the Avengers could eventually find the robot and divulge the "Scorched Earth" program. Zimmer ordered Iron Man to find Arsenal on his own, but Stark's sudden secrecy raised his teammates' suspicions and they followed him as he ventured underground. The Avengers additionally picked up a scrambled signal being sent from the Pentagon to Iron Man, prompting their laison Henry Gyrich to order the activation of a newly-installed signal jammer on top of Avengers Mansion. The jamming screen blocked the WWV shortwave, causing Arsenal's activation.[2] The robot rampaged through Avengers Mansion and reached the surface, with the Avengers being unable to stop him. An operative of the Pentagon discovered information pertaining to WWV while going over the robot's design notes, and Senator Zimmer sent Warbird and the Department of Homeland Security to assist Iron Man and deliver him a printed portion of the robot's program. Iron Man discovered the purpose of Arsenals' calibration to WWV and had Warbird destroy the jamming dish, causing Arsenal to instantly fall dormant. The government subsquently began to dismantle the robot.[1]

Robot Body: Arsenal Alpha possesses an extremely strong and durable body which allows him to effortlessly tear through the Avengers Mansion, deal powerful blows capable of knocking back Iron Man and the Vision, and deflect energy attacks from the two heroes, and quickly recover after being knocked out by an energy blast from Warbird.[1]

Weapons Systems: Arsenal is equipped with multiple weapons of different kinds including a flamethrower mounted on its left wrist, a gatling gun on its right wrist and chest energy beams. The robot can additionally deploy a rotary machine gun on each shoulder and dispel gas from its upper torso.[2]

Like this? Let us know!
Retrieved from "https://marvel.fandom.com/wiki/Arsenal_Alpha_(Earth-616)?oldid=5837714"
Community content is available under CC-BY-SA unless otherwise noted.