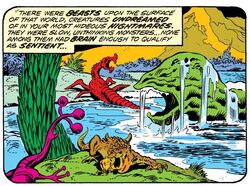 The planet Arthros was a dead world, located in Sector 17A of the Negative Zone,[1] until a Tyanna ship crash landed on that world about a thousand years ago. Seeking spread the seed of life across the Negative Zone, they instead unleashed the cylinders of life on this world before they succumbed to hunger, but not before leaving a helmet of knowledge for any sentient life to find. About a thousand years later, life began to bloom on the planet, one of the creatures this world created was the sentient insectoid of the Arthrosians. This creature was shunned and persecuted by the other creatures due to its intelligence and it grew to hate the beings who lived there. It eventually came across the Tayannan ship. Putting on the helmet the creature was told of that race's downfall and all manner of technological secrets. Seeking immortality and power enough to rule the Negative Zone, the creature called itself Annihilus and created his Cosmic Control Rod sought to take over the Negative Zone.[2]

Like this? Let us know!
Retrieved from "https://marvel.fandom.com/wiki/Arthros?oldid=5509975"
Community content is available under CC-BY-SA unless otherwise noted.