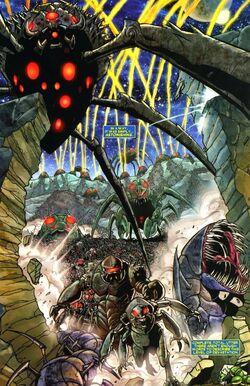 Arthrosians are an intelligent species in the Negative Zone. They descended from the Tyannans who set out from the planet Tyanna to terraform other worlds, planning to use specially engineered spores. After their ship crashed on an uninhabited world of Arthros, they released all their spores and died. The spores grew and produced an intelligent insectoid being, Annihilus, who found the Tyannan wreckage and learned everything about the Tyannans, especially their genetic engineering technology.[2]

Annihilus fabricated his Cosmic Control Rod from the spore canisters and used the engine to power it. With this mighty tool and a seemingly endless supply of insectivorids, he embarked on a campaign to rule the Negative Zone.[3] It was previously believed that Annihilus was the only Arthrosian, but that has changed with the Annihilation Wave. They are an incredibly powerful race, slaughtering a million worlds on the first day of their invasion of the positive universe, otherwise known as Annihilation Day.[4]

Arthrosians have a chitinous exoskeleton, claws or pincers, mandibles, and eyes that appear to glow. With their claws and depending on the type of Arthrosian their mandibles, they are able to rend flesh and armor (e.g. Nova uniform).[5] Some of the Arthrosians have other abilities, such as flying via wings or the ability to breath fire.[6].

Arthrosian possesses a variety of superhuman abilities thanks to their unique physiology and the harsh environment of Arthros and the Negative.

Arthrosians thanks to salvaged Tyannan technology from their ship advanced faster than any other race in the Zone. Arthrosians are highly familiar with the advanced technology of the Tynnans, particularly the advanced weaponry and genetic engineering technology they had at their disposal.

Advanced (salvaged from the Tyannans)

Retrieved from "https://marvel.fandom.com/wiki/Arthrosians?oldid=5648939"
Community content is available under CC-BY-SA unless otherwise noted.