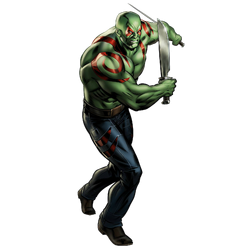 Hair
No Hair At All
Unusual Features
Red tattoos that cover Drax's body
Origin
Origin
Ex-human that was Killed by Thanos, Arthur Douglas was brought back to life as Drax the Destroyer, and seeks revenge on the Mad Titan until today.
Reality
Earth-12131
Creators and Appearances
Creators
Playdom
First Appearance
Marvel: Avengers Alliance
(March 1, 2012)

Arthur Douglas witnessed Thanos' first visit to Earth and paid for it with his life. When Kronos the Eternal created a powerful body to counter Thanos, Arthur's soul was instilled within it and he was reborn as Drax the Destroyer. Though renowned as a Guardian of the Galaxy, Drax's true allegiance lies with a single purpose: killing Thanos.

When Ronan and Nebula came to Earth looking for Thane, Drax and the Guardians of the Galaxy aided S.H.I.E.L.D. and the Alliance against the villains.

At first, Drax confronted Corvus Glaive, who fled after the battle. When Ronan and Nebula (with the support of the brainwashed Circle of 8) attacked Avengers Tower, Drax engaged Proxima Midnight, who was defeated by Drax.

Seemingly those of the Arthur Douglas of Earth-616.

Seemingly those of the Arthur Douglas of Earth-616.

Like this? Let us know!
Retrieved from "https://marvel.fandom.com/wiki/Arthur_Douglas_(Earth-12131)?oldid=6057495"
Community content is available under CC-BY-SA unless otherwise noted.