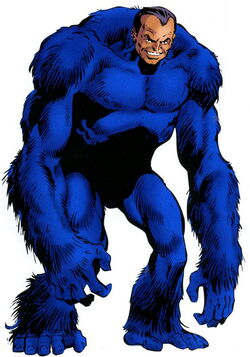 ... People may forget my face, but they seldom forget where they've seen it.... A human head grafted onto the body of a six-hundred pound gorilla!

Dr. Arthur Nagan was a former surgeon who took the organs from gorillas to use in people. However, his scheme was allegedly thwarted by the gorillas, who somehow transplanted his head onto a gorilla's body.[5] He was the leader of the Headmen. Among his "achievements" was transplanting the head of Chondu the Mystic onto a variety of unsuitable bodies, including a monstrous body with tentacles and wings,[6] as well as transplanting Chondu's brain alone into the head of Nighthawk.[7] He also managed to shrink the Defenders, Nebulon, and US President Gerald Ford to miniature size and trap them under a glass bowl so he could study their behavior.[2]

After being bested by Luke Cage in a fight, Nagan developed a particular fixation on taking his revenge upon the Hero for Hire.[8]

Gorilla-Man later appeared as a member of Porcupine's Lethal Legion. He and the Lethal Legion fought some superheroes at the Marvel Comics office where Gorilla-Man was taken down by Captain America and Beast.[9]

After designing a life support to attach to Chondu the Mystic, Gorilla-Man and the Headmen tracked Spider-Man to the part of Lyja (who was posing as Alicia Masters) at the time. They were defeated by Spider-Man and Human Torch and were arrested by the authorities.[10]

At the time when he was in the services of Norman Osborn and H.A.M.M.E.R, Quasimodo researched Gorilla-Man and the rest of the Headmen.[11]

Sometime later, Nagan was incarcerated in Prison 42 in the Negative Zone.[12] After the prison was overrun by Blastaar's forces, Nagan sided with the Negative Zone warlord alongside Bison, Condor, and Skeleton Ki. He then fought alongside Blastaar's forces against an invasion by the Shadow Initiative, whom they were intent in retaking Prison 42.[13] However, the prison fell to the Shadow Initiative, and Nagan was recaptured.[14]

During the threat of the Serpent and after Juggernaut in the form of Kuurth: Breaker of Stone damaged the Raft, Gorilla-Man was among the villains seen taking part in the breakout and detained by Justice.[15]

When he was behind a hostage situation, Gorilla-Man was defeated by Captain Ultra.[16]

Gorilla-Man later battled Spider-Man along with a group of other villains including; Angar the Screamer and the rest of the Headmen. Led by Doctor Bong they planned on conquering the Multiverse by creating a “Cosmic Bong” in the world’s quietest room. They were defeated by Spider-Man and arrested by S.H.I.E.L.D.[17]

After an experiment that resulted in the heads of gorillas being grafted onto human bodies, Gorilla-Man became the King of the Gorilla Men and led them in a fight against the U.S.Avengers. Gorilla-Man tried to remove Robert Maverick's head after he had regressed back from his Red Hulk form, but was subdued by flying squirrels that were summoned by Squirrel Girl.[1]

Nagan possesses the body of a gorilla, which gives him the strength, agility, speed and reflexes of a gorilla.

Nagan is a brilliant surgeon who can transplant almost any living living tissue or organ into another organism.

Nagan can lift about two tons

Like this? Let us know!
Retrieved from "https://marvel.fandom.com/wiki/Arthur_Nagan_(Earth-616)?oldid=5674579"
Community content is available under CC-BY-SA unless otherwise noted.