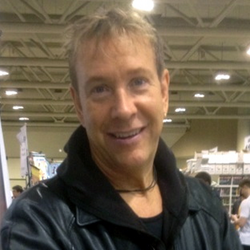 As the Marvel Zombies cover artist, Arthur Suydam burst onto the scene with his creative innovation of infusing the art of sequential art with classical painting.

Recently honored with the coveted Spectrum Magazine Gold Award for Excellence in Illustration, Suydam’s immense body of written and illustrative work comprises an aesthetic that is uniquely distinguishable. Recent releases include Arthur Suydam: The Art of the Barbarian; Skin Deep; The Alien Encounters Poster Book; Visions: The Art of Arthur Suydam; The Fantastic Art of Arthur Suydam; Mudwogs and The Adventures of Cholly and Flytrap, published worldwide and currently in pre-production for film with Paranoid Delusions Productions. In addition to his own works, Suydam has contributed text and artwork to countless comics publications including Heavy Metal, House of Secrets, Batman, Conan, Tarzan, Predator, Aliens, Death Dealer, Epic Illustrated and National Lampoon, to name only a few, as well as new work coming out from Marvel, DC Comics, Image, Last Gasp, Vanguard Productions and Eva Ink. Current projects include Fireflies, Mouse in the House and When Giants Walk the Earth — witty looks at rural life and in the American Heartland, mystery and magic, presently under film option.

In fact, Arthur is on the comics scene in a big way, having received the “Artist Guest of Honor” Award from Dragon Con, and Lifetime Achievement Awards from the University of Maryland and the San Sebastian Film Festival in Spain. Arthur has also just been inducted into the Society of Illustrators in NYC.

You may have also seen his new superhero work from DC Comics and Marvel Comics over the last year—mostly recently his Marvel Zombie covers that have been named in the “Wizard Magazine Top 20 Covers of the Month”. The first issue of this over the top selling comic has already gone back to press an unprecedented three times.

Like this? Let us know!
Retrieved from "https://marvel.fandom.com/wiki/Arthur_Suydam?oldid=6838535"
Community content is available under CC-BY-SA unless otherwise noted.