For fictional versions of Artie Simek as a character within comic books and/or other media,
visit this disambiguation page.
Artie Simek 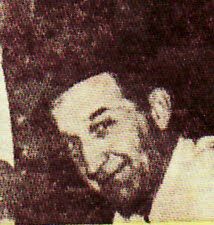 ("Adorable") Artie Simek was a letterer for Atlas/Marvel during the Golden and Silver Ages. He was the father of Jean Simek Izzo ("second generation letterer"). Artie Simek passed away on February 20th, 1975. He was publicly mourned that month in Marvel's Bullpen Bulletins. As per the Grand Comics Database, Simek's final work was lettering pages 2–8 and 10 of the 32-page superhero story "Eelar Moves in Mysterious Ways" in Giant-Size Defenders #5 (July 1975), which an editorial note on the letters page describes as the last Simek completed before his death while working on the issue.

Artie Simek was one of the two primary comics letterers in Marvel's Silver Age, Sam Rosen being the other of those two.) (figuratively speaking) He designed the logos for Fantastic Four and other titles.

Artie Simek would get the lousiest credits in each issue. For example in Journey Into Mystery #121 the credits read: "Another towering triumph for Stan Lee, Writer [...] Another day, another dollar, for Artie Simek, letterer." In Tales of Suspense #58, the credits read "Lettering of Breath-taking Adequacy by: Art Simek." Another time, his name was largest in the credits, with the explanation that "this was cheaper than giving him a raise." Though this might seem unfair to current comic book readers, letterers seldom, if ever, received credit for their work before Stan Lee instituted this as a policy at Marvel in late 1962. (Simek, Sam and Joe Rosen, Gaspar Saladino, Ira Schnapp and others toiled for decades in the field without recognition prior to this; it is unclear when DC Comics, Marvel's "Distinguished Competition," also called variously "Brand X" and/or "Brand Ecch," commenced to follow suit.) He also played the spoons.

Like this? Let us know!
Retrieved from "https://marvel.fandom.com/wiki/Artie_Simek?oldid=6550450"
Community content is available under CC-BY-SA unless otherwise noted.