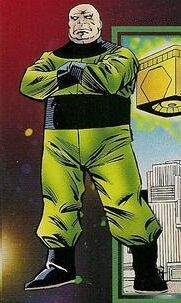 He's reallocating the world's resources in a fair and responsible manner. But that isn't what worries you most. He's removed dictators -- involved himself in politics, and you're afraid he'll come after you next. You're right. He will. I know this for a fact.

Dr. Artur Zarrko was a brilliant evil scientist from the year 2262, who built a time machine to escape from his peaceful 23rd century and visit more primitive periods, where nuclear weapons could be stolen easily.[1]

While Thor is helping the US Military test their new missiles, Zarrko appeared in his time machine and stole the device and escaped into the future before Thor can stop him. Promising to recover the bomb, Thor summons his father Odin and asks how he might travel into the future. Odin guides him in using his hammer to time travel by tying a fragment of Zarrko's craft (broken off in the brief battle between Thor and Zarrko) and spin his hammer faster than the speed of light so that its magic will transport him to the future.[1]

Back in the 23rd Century

The spell worked and Thor is sent into the future year of 2262, where he found that Zarrko has used the C-Bomb to take over the future Earth. When Zarrko learns of Thor's arrival in his time, he sends his newly established guards after Thor. Thor quickly finds someone from the future to act as a decoy, putting on a costume like Thor, while Thor dawns a black robe and the two storm Zarrko's citadel. Inside, the fake Thor is captured lulling Zarrko into a false sense of security when he is suddenly ambushed by the real Thor. When Zarrko's weapons fail he flees and sics an army of robots against Thor, who grab his hammer. Using a water pipe to short circuit the robots, Thor manages to make them drop his hammer before the sixty second time limit would have him change back into Donald Blake. Zarrko meanwhile has escaped in a ship and is planning to drop the C-Bomb on the city, however Thor summons up a storm which causes Zarrko's ship to fly erratically enough for Thor to recover the dropped bomb. When Zarrko's ship crashes, the villain survives but has suffered amnesia and is taken into custody. Praised as a hero, Thor then returns to the present where he returns the C-Bomb back to the military.[1]

Return to the Past

Odin halved Thor's powers and barred him from entering Asgard when he insisted on marrying Jane Foster. Seeking to take advantage of this opportunity, Loki restored Zarrko's memory, who promptly traveled back in time to battle Thor. This time Thor was unable to defeat Zarrko's robot and willingly surrendered and agreed to return with him to the 23rd Century as his slave.[2] Thor assisted Zarrko in conquering the 23rd Century, taking over the central computer that ran the entire world. Freed from his vow to help Zarrko, Thor then quickly dispatched his foe, incapacitating him with ease without his robot around. Thor then returned to his own time, and Odin - having viewed all the events as they transpired - restored Thor to his full strength.[3]

Zarrko's plot was revealed to be a plan to save humanity. In his future, Thor, had separated from his human self, Jake Olson, and lost his ability to understand humanity. Because of this, Thor became more and more oppressive and imposing, and believed that ruling humanity was the only just thing to do. Zarrko knew that in his future, Thor would become a tyrant, so he had to travel back in time and stop him before the Odin Force made him invincible and near-omnipotent.[4]

When the Governments of Earth launched a massive assault on Asgard, Zarrko tried to escape with his time machine, only to be stopped by Thialfi.[5]

Zarrko's attempted time travel was instrumental for Thor to create for himself a new future in which he would never be the tyrant he would have been without his human self.[6]

Zarrko later returned disguised as Boris, a manservant to Kristoff Vernard, the heir of Doctor Doom, who had become a member of the Fantastic Four following the "death" of Mister Fantastic.[7][8][9] He was soon exposed but used his time machine to cause chaos in the building by bringing in various heroes and villains from the past and the future to fight it out. He later escaped, deciding that all he wanted was a quiet place and plenty of food.[10]

Artur Zarrko was a scientific genius in many fields, including Biology, Nuclear Physics, Robotics, and Electronics. He was also a gifted engineer.[11][12][13][14][15][16]

Mining Robot: Dr. Zarrko used a 23rd Century Mining Robot, to help with his battle with Thor. It was created to mine so had great strength and durability, compared with 20th century technology.

Servitor: The Servitor was a giant robot with great strength capable of discharging concussive energy. It also was modified to realease time missiles which contained "chronal radiation" which allegedly reverses the flow of time.[11][12][13][14][15][16]

Like this? Let us know!
Retrieved from "https://marvel.fandom.com/wiki/Artur_Zarrko_(Earth-6297)?oldid=6463948"
Community content is available under CC-BY-SA unless otherwise noted.