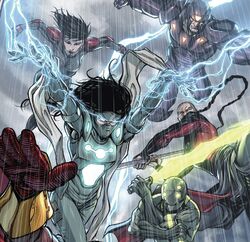 After the disbandment of the Dynasty following the death of their leader, The Star, during Thanos' invasion, S.P.E.A.R. director Xian Zheng informed one of the former members, Weather Witch, about his organization's Ascendants Initiative. The Witch agreed to be its leader, as long as she could select her teammates.[1]

The Ascendants were first publicly deployed against Gorgon and the Hand, during Gorgon's attempt to launch an attack on China by summoning the sleeping dragon below Madripoor.[2]

When Captain America established a Hydra Empire in the United States of America, Hydra splinter groups started to form all over the world and several superhero teams, such as the Ascendants, were gathered to stop Hydra from going any further.[3]

Like this? Let us know!
Retrieved from "https://marvel.fandom.com/wiki/Ascendants_(Earth-616)?oldid=5545051"
Community content is available under CC-BY-SA unless otherwise noted.