Asgardians of the Galaxy 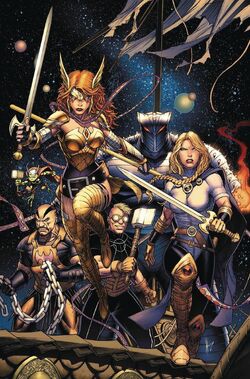 Base of Operations
Asgard's Reach
Affiliations

The Asgardians of the Galaxy were a team of Asgardian misfits assembled by Angela, secretly on behalf of Kid Loki. Their objective was to help him retrieve the Naglfar Beacon. They initially failed their mission, since the space pirate Nebula obtained it before they could.[2]

The Asgardians followed Nebula's trail, fighting soldiers of the Naglfar Armada she summoned on Netredeen and then on Chandilar to test its power.[1] During battle, Kid Loki was exposed as the mastermind behind the formation of the Asgardians of the Galaxy. The Nova Corps intercepted the team on Chandilar[3] and arrested them. Angela let the team remain in captivity until they learned of Nebula's next target, Earth. Nebula abducted Loki to her ship when he teleported to warn Thor.[4] The Asgardians intecepted Nebula's ship, and Loki used an illusion to incapacitate Nebula long enough for Valkyrie to take the Naglfar Beacon from her hands, promting her to flee. The Asgardians of the Galaxy were joined by Urzuul, a dwarf Nebula had kidnapped to help her find the beacon.[5]

Retrieved from "https://marvel.fandom.com/wiki/Asgardians_of_the_Galaxy_(Earth-616)?oldid=4923869"
Community content is available under CC-BY-SA unless otherwise noted.