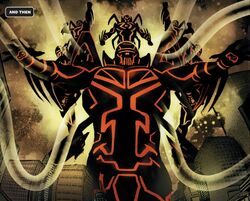 The Aspirants were some of the celestial beings the First Firmament (personification of the very first universe) created to appease his loneliness. They were industrious in their worship of him and sought his approval whenever they created life on their own.

Unlike their dark counterparts, the multicolored Celestials wanted their creations to evolve and for the universe to evolve with them, and thus know growth, change, and mortality. This divergence of ideas ushered in a Celestial War[2] for the dominion of all existence. As the war approached an end, the Aspirants created the Godkiller Armor to turn the tide of the battle and annihilate the Celestials. The Godkiller was later stripped of some of its components to provide key elements for the Aspirants' fleets, which entered a civil war. This internal conflict gave the Celestials time to recover and eventually crush the Aspirants.[4]

When the Celestials detonated their unimaginable weapons in the last conflagration, the First Firmament was shattered into pieces, forcing him to flee in terror to the farthest edges of being with the remaining Aspirants. Hundreds of new universes were born from the First Firmament's pure substance, forming a new, collective being who was the Second Cosmos and first Multiverse. As time passed, the Multiverse died time and time again only to be reborn evolved soon afterwards.

In the Seventh Cosmos,[2] three Aspirants caused epic genocide in Earth-200080 to fuel their immense sink-suits, needed to explore the Hypoverses.[1] Some time later, a group of Aspirants became bored with their universe[5] and started to consume universe after universe.[3] The Omega, a race the Celestials created to serve them,[2] managed to survive those Aspirants and searched out other universes, finding small pockets of resistance in the process. Using the Concordance Engines, the Omega built a world that could stand against the Aspirants: Earth.[5]

After the death and resurrection of Eternity and his change from Seventh Cosmos to Eighth, the First Firmament took advantage of the weakened state in which he was left to bind him in chains.[2]

Like this? Let us know!
Retrieved from "https://marvel.fandom.com/wiki/Aspirants?oldid=5648729"
Community content is available under CC-BY-SA unless otherwise noted.