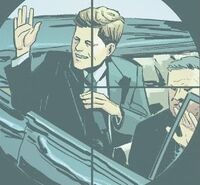 On November 22, 1963,[1] in Dallas, Texas, the President of the United States of America John F. Kennedy was riding with his wife Jacqueline, Texas Governor John Connally[2] and his wife. He was fatally shot by Lee Harvey Oswald firing from the Texas School Book Depository into Dealey Plaza from a nearby building. The motorcade rushed to the hospital where he was announced dead.[3]

Nightingale from First Line had a vision of the president being killed by an unknown assailant. The team travelled to Dallas to stop the attack but mistaken Chimera and Howler as the attackers not aware of Oswald's plans.[4]

In an experiment the time traveler Immortas travelled back to 1963. Doing so he created Earth-9007 a timeline Oswald was killed by an Agent Corrigan. He arrived at the depository after getting a tip off phone call from Immortus. He created the alteration so that the single assassin theory would be ignored and the true killer of JFK from the grassy knoll would be investigated. Immortus erased the timeline rather then seeing how it would play out.[5]

A number of alternative theories exist surrounding that event.

When JFK was resurrected as a Zombie he told Deadpool in his dying breath that the shot came from in the car. Deadpool believed that Jackie Kennedy was the second shooter.[6]

Various claims or statements have implicated some parties into the assassination:

It was revealed JFK had been replaced by a Skrull and was taken out by the CIA.[10]

Captain America stated that JFK was murdered by three Corsican mercenaries paid by Fidel Castro. The information was known within three days after the assassination, including by Nick Fury, who was under orders to lie. To prevent a World War, the information was suppressed and Lee Oswald took the fall for people to have a face and a name to blame.[11] Sabretooth also mentioned that Oswald was a red herring taking the fall.[1]

When the Red Skull the son of Captain America escaped the government he made a statement of his rebellion against the system that created him by orchestrating the assassination of JFK.[12]

An assassin stood on the grassy knoll of Dealey Plaza and killed President John F. Kennedy.[13]

It was believed that Magneto used his powers to change the directory of the bullet to kill JFK, while himself stated he tried to stop the bullet, as JFK was a mutant.[14]

Retrieved from "https://marvel.fandom.com/wiki/Assassination_of_John_F._Kennedy?oldid=5791554"
Community content is available under CC-BY-SA unless otherwise noted.