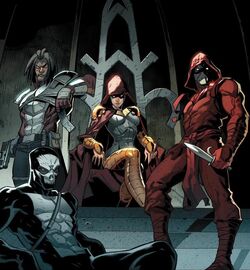 To bring peace in the two bands, Marius Boudreaux agreed to marry his daughter Belladonna to the Thieves Guild's Gambit. Their wedding however was interrupted by Belladonna's brother Julien who felt Remy was unworthy of his sister's hand. Julien challenged Gambit to battle, but lost. Remy was banished as punishment for injuring a member of the Guild and abandoned Belladonna. The Guild itself however remained unified.

The guild remained relatively silent for some time, keeping to their own business, until they came into a conflict of interests with the rival assassin organization the Hand. Both sides had operated in the West Coast and laundered a substantial amount of money through the San Francisco area. With each side eager to be the dominant racket a fued began.

The Guild sought out X-Man Domino to take advantage of her luck powers and tactical expertise, all while hiding their true identities and agenda. Domino, needing the money, was eager to co-operate until she learned of the business the two clans were fighting over - under-age sex trafficking. Leaving all the assassins to their battles, she snuck away and placed the kidnapped girls into secure care and secretly stole a truck containing all of the money made from their suffering. Believing she had gotten away scott-free, her home was then attacked by the Guild who savagely injured her, giving her mere hours to return the stolen money.

At this point Domino was reluctantly forced to ask Wolverine for help, neglecting to inform him of the stolen money at first. Through the combined efforts of X-Force, the Guild was out-gunned and outfought with Wolverine convincing/threatening Belladonna to remove the hit on Domino.

The Return of Candra

The Guilds seemingly separated and, years after her death, Candra returned, as her psyche managed to augment her remaining power and slowly pulled back the pieces of her body back together. The process was hastened by tributes from the Guild.[2]

The Guild eventually encountered Scarlet Spider when they were sent to kill his friend Dr. Donald Meland. Scarlet Spider was recognised by the Assassins as Kaine, with whom they had issues to settle with as he had previously killed on their territory.[3] Kaine was permitted to live as long as he promised to kill someone for Belladonna at a later date.[4]

Months later, the Belladonna sent Kaine to kill Wolverine.[5] Scarlet Spider managed to ally with Wolverine and they teamed-up in order to stop the Guild. When they arrived at New Orleans, it was revealed to them that Belladonna was following the orders of Candra[6], who tried to get the essences of Scarlet Spider and Wolverine to finally return entirely. The two heroes managed to convince some Guild members to help them to stop Candra. She was finally killed when Scarlet Spider stung her head, although Belladonna claimed she would find a way to return. When Belladonna was about to order her men to kill Kaine and Wolverine, Kingpin's Arranger showed up and revealed to her the Assassins Guild's assets were now under his boss's control.[2]

While chasing down named a target named Charles Helder, several of the Assassins Guild's mercenaries were murdered by Deadpool, who had been hired to protect Helder. Deadpool ended up killing Helder himself after learning that he was a nefarious businessman responsible for the death of children.[7] Belladonna sent agents after Deadpool, including Threnody and Blackout, but he evaded them and Threnody even left the Assassins Guild to join him. Deadpool infiltrated the Guildhouse, and confronted Belladonna, but offered her to work together.[8] Belladonna instead decided to keep retaliating against Deadpool, and sent agents after his handler, Weasel.[9] After saving Weasel, Deadpool raided the Guildhouse, and managed to single-handedly take down the Assassins Guild's best killers. Belladonna tried to back down on refusing Deadpool's agreement, but he impaled her with a katana, killing her.[10]

Like this? Let us know!
Retrieved from "https://marvel.fandom.com/wiki/Assassins_Guild_(Earth-616)?oldid=5847500"
Community content is available under CC-BY-SA unless otherwise noted.