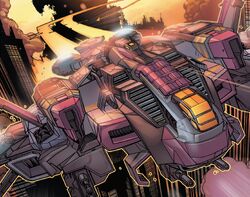 The Astarion was the starship used by some members of the Inhuman Royal Family, and Flint and Jovana, to embark in a journey towards outer space, directed by Marvel Boy, on the search for a way to ensure the survival of their species following the destruction of the last Terrigen.[1]

The Astarion was heavily damaged by Ronan the Accuser when it approached the ruins of Hala, and even had a wing torn off.[2] After the Inhumans appeased Ronan,[2] the Plex Intelligence offered to put its repair systems at the service of the Inhumans to fix the Astarion.[3]

When the expeditionary group approached the World Farm during their continued journey, the Astario was telekinetically exploded by the Harvester-Class Progenitor.[4] At the last second, Flint encased himself and the rest of the crew inside a quartz sphere, which he then crash landed into one of the planets of the World Farm.[5]

Retrieved from "https://marvel.fandom.com/wiki/Astarion?oldid=4646121"
Community content is available under CC-BY-SA unless otherwise noted.