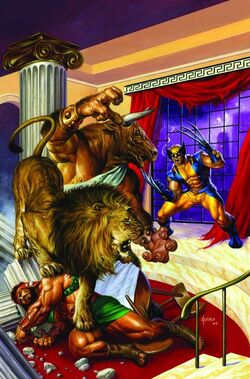 Asterius was the son of Pasiphae, wife of King Minos of Crete. She slept with the Bull of Crete sent by Zeus, and gave birth to Minotaur, a creature half man – half bull. King Minos was embarrassed, but did not want to kill the Minotaur, so he hid the monster in the Labyrinth constructed by Daedalus at the Minoan Palace of Knossos.[citation needed]

Angrodes, son of Minos, went to Athens to participate to the Panathenaic Games, but he was killed during the Marathon by the bull that impregnated his mother. Minos was infuriated, and demanded Aegus, king of Athens, to send seven men and women every year to the Minotaur to advert the plague caused by the death of Androgeus.[citation needed]

Later Theseus insisted on being one of the seven youths and seven maidens of Athens to be sacrificed to the monster as an annual tribute. He promised his father that if he were successful in killing the Minotaur he would on his return voyage replace his ship's black sails with white ones. Ariadne, daughter of King Minos, fell in love with Theseus and gave him a magic ball of thread to be dropped at the entrance of the labyrinth; it led Theseus to the Minotaur, which he killed, and he then followed the unwound thread back to the entrance.[5][6]

In 281, Roman boy Decimus Furius activated his mutant powers, turning himself into a Minotaur-like creature. After years in prison and a time as a gladiator, he became worshiped as the Minotaur.[3]

In the night his family was slaughtered by pirates on their island in the Aegean Sea, young Dario Agger prayed to a bull statue on the promise of a voice, and was given the power of shapeshift into a Minotaur,[4] with "something" of the ancient Minotaur's power.[7]

The Minotaur was brought back by Eurystheus and Matsu'o Tsurayaba, and opposed Hercules and Wolverine on behalf of several of the heroes' foes. He ended up launching himself out a window while trying to hit Wolverine.[8]

Much later, a more articulate and intelligent Asterius somehow wound up acting as the guardian of Greece, appearing as statue in the city of Papaconstantinos.[1]

As such, he confronted Deadpool, at the time carrying Shiklah's sarcophagus through Greece, ordering him to yield and explain why he was carrying such evil through his country and city. Deadpool ended up provoking him into a fight, proposing he pull his cart, calling him a "pigeon toilet"..., and after a scooter chase, Deadpool lured him into falling from a bridge, buying himself time to escape with the now freed Shiklah.[1]

Despite this activity, he was believed deceased by Hekate when Declan Dane infused Man-Bull with the power of the Minotaur, leading him to believe himself the mythical creature and rampaging through the island of Santorini. The Scarlet Witch, at the request of Hekate, found the "Minotaur" and removed the enchantment, revealing Man-Bull's true form.[2]

The Minotaur possesses an uncertain amount of superhuman strength, likely enhanced human, and possibly enhanced durability and olfactory senses. It is a savage, unintelligent creature, with hard, sharp horns on its head. In recent appearances he appeared more articulate and of average intelligence, despite being prone to uncontrollable bouts of rage, which he regrets being unable to hold off.

Possibly the ability to turn himself to stone.[1]

Sturdy horns and hooves, able to fend off steel[citation needed]

Like this? Let us know!
Retrieved from "https://marvel.fandom.com/wiki/Asterius_(Earth-616)?oldid=6470677"
Community content is available under CC-BY-SA unless otherwise noted.